Faves, Raves And Composers In Their Graves 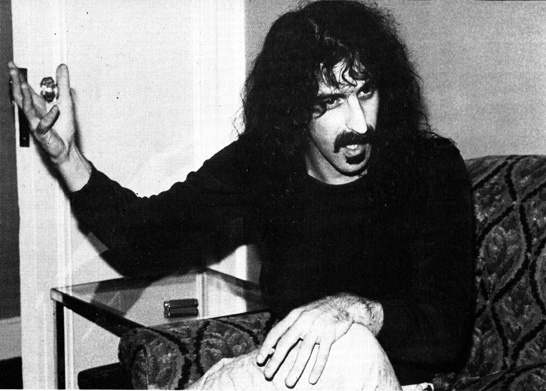 
1. 'Supernaut': Black Sabbath. I think it's from Paranoid. I like it because I think it's prototypical of certain musical style, and I think it's well done. Also, I happen to like the guitar lick that's being played in the background.

2. After The Gold Rush: Neil Young. The whole album; because it's very direct, it's very melodic, and it sounds like a bunch of demos.

3. Between the Buttons: The Rolling Stones. The American release -- I don't like the English version so much because it contains a totally different set of tunes. I understand that they don't like the album very much but I thought that it was an important piece of social comment at the time. I remember seeing Brian Jones very drunk in the Speakeasy one night and telling him I like it and thought it superior to Sergeant Pepper ... whereupon he belched discreetly and turned around.

4. The American issue of Abbey Road: The Beatles-- which has nothing to do with the material on the album but because I think it's probably the best mastered, best engineered rock'n'roll record I've heard ... except that I take exception to the choice of stereo placement.

5. The first Muddy Waters album -- because it's wonderful.

6. The Devils Of Loudun: Krzysztof Penderecki. Because it's also an extremely well-produced album and I think it's an excellent piece of dramatic music. And also because Tatiana Troyanos who plays the main nun sounds absolutely marvellous during the enema scene. The story is about a hunch-backed nun who's possessed by the Devil and has to have an exorcism. The exorcism involves the nun being given a hot herbal enema. In live performances the exorcism takes place behind a screen and you hear Tatiana singing and screecheing whilst an orchestra plays enema music. You also hear the Devil chuckling from inside the nun's bowel.

7. The Complete Works Of Edgard Varèse, Volume 1. As it was the first album I'd ever heard of any of Varèse's music and it opened my eyes up to a lot of possibilities.

8. 'Three Hours Past Midnight': Johnny "Guitar" Watson. One of the best guitar solos on an old R&B record.

9. 'The Story Of My Life': Guitar Slim. Another of the best guitar solos on an old R&B record.

Recently I've been listening to Mott The Hoople's Mott The Hoople; I enjoy every cut except 'The Golden Age Of Rock'n'Roll'. 'Newly Wed' by The Orchids – one of my very favourite group vocal R&B tunes. 'My White Bicycle' – Tomorrow. Because it was one of the best-made singles of its time, and it may have been a little ahead of its time too. I also like the other side, 'Claramount Lake' – I like the guitar solo -- oh, it's Steve Howe, is it? Well if you see him tell him I like the guitar solo on 'Claramount Lake'.

'Can I Come Over Tonight?' – The Velours. Any musicologist that can find that record and listen to the bass singer ... he's singing quintuplets and septulets. And considering where it came from and when it was made (it was on the East Coast Onyx label) it was amazing. 'Let's Start All Over Again' – The Paragons. Also prototypical and it has the unmitigated audacity to have the most moronic piano section I ever heard on any record – and it repeats it often enough to convince me that it's deliberate.

Anything that Richard Berry did. Without getting the credit for it he made so much of what happened in R&B possible and so many people wouldn't have been there at all without him. He was one of the most important secret sources behind the West Coast R&B in the fifties and now he's walking around trying to get a contract.

I interviewed him when I did a piece for Life magazine and he told me he sold the rights for 'Louie Louie' for 5,000 dollars. He was working with a Latin band at a place called the Harmony Park Ballroom and the band had an instrumental that went ... (sings 'Louie Louie' rhythm) and he scribbled the lyrics out on a paper napkin in the dressing room. It's always been one of my favourite fantasies that songs like 'Wooly Bully' get written on a lunch bag in blue crayon.
(Giovanni Dadamo collected Zappa's thoughts during a recent interview)