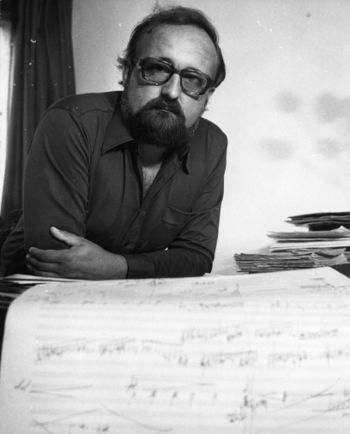 Krzysztof Penderecki (Polish pronunciation: [ˈkʂɨʂtɔf pɛndɛˈrɛt͡skʲi] (November 23, 1933 - March 29, 2020) was a Polish composer and conductor. His avant-garde composition "Threnody to the Victims of Hiroshima" (1960) for string orchestra and his choral "St. Luke Passion" (1966) both featured novel compositional techniques, which made him a famous name. He is equally famous for Die Teufel von Loudun (The Devils of Loudun). Since the 1970s Penderecki's style has changed to encompass a post-Romantic idiom.

Zappa mentioned Penderecki as one of his favorite composers in the interviews Humo Spoke With Zappa! and Martin Perlich interviews FZ.

"Probably the most influential composer in terms of how many people imitated his style, in recent years, that award would go to Webern first, for being the founder of the 'boop-beep' school and also to Penderecki because of the 'texture' music that a lot of people imitate. But I think that even his music grows out of some of the textural experiments that Varèse did."

Den Simms: "Particularly, conducting the audience, where did your idea of doing that ... I know that you've been doing that for years, too. Is that just somethin' you thought up, or somethin'? How did you come about doin' that? That's my particular favorite, one of my favorite things you do."

Frank Zappa: "There's a school of European composition that deals with music as texture. Like Penderecki. Some of his stuff would fall into that, where it's not about the melody and the chords. It's about, if you take a group of instruments, and you have them doing different kinds of things all at the same time, it creates something that's more than a chord. It's a texture. It's a sound that's crawling with texture and it's wiggling. And it seemed to me that when an audience applause occurs, there's like, random texture, all the different beats are going at different rates, and that makes this one big sound that's called "Applause". But if you control the rate of the clapping or the location of the clapping you could use the sound of the applause as a musical thing. So I tried it one night and the audience liked it ..."

(Quoted from They're Doing the Interview of the Century, Part 1)

"If you want some real "deep in a hurt" music try "Utrenja" by Penderecki. (...) It's got a lot of screaming and torment and dissonant chords. Real hurt, if that's your idea of a good time."[1].

Zappa named "The Devils Of Loudun" by Penderecki one of his 10 favorite records in Faves, Raves And Composers In Their Graves. In Classical Zappa he also cites it as his favourite opera, because he "liked the enema scene." He added some more details about his appreciation during a 1975 radio interview:

"This Catholic Polish gentleman which writes very interesting music doing this opera with religious and demonic overtones (...) The thing that knocks me out: I've got this Philips recording with Tatjana Troyanos singing the lead vocal in this enema sequence where's to exercise Asmodeus who is supposed to be lurking inside her bowel, according to the text by Aldous Huxley. They have to take her behind the screen on stage and pump her up in sort of philosophical sense with some, unseen by the audience, herbal burbling enema. And the music he has going on for that scene is very ingenious, you know. You hear the bubbles and she is singing interesting little screams and grunts and stuff. I'd say: "That's a step forward." There's not too many things in rock 'n' roll that can compare to that. I put it right up alongside of "Voulez-Vous Couchez Avec Moi", one of those funk tunes." [2].