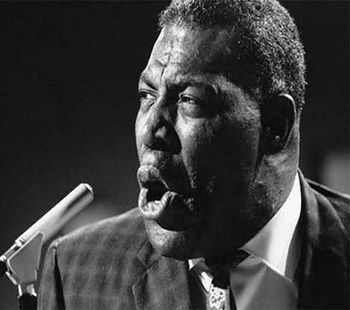 Zappa and Captain Beefheart were huge Howlin' Wolf fans since their teenage years. As Zappa described in The Real Frank Zappa Book (1989): "Don was also an R&B fiend, so I'd bring my 45s over and we'd listen for hours on end to obscure hits by the Howlin' Wolf, Muddy Waters, Sonny Boy Williamson, Guitar Slim, Johnny "Guitar" Watson, Clarence "Gatemouth" Brown, Don & Dewey, the Spaniels, the Nutmegs, the Paragons, the Orchids, the etc., etc., etc.". Captain Beefheart also based his own vocal style on Howlin' Wolf.

Howlin' Wolf is mentioned in the list of influences in the sleeve of Zappa's debut album Freak Out! (1966), under the heading: "These People Have Contributed Materially In Many Ways To Make Our Music What It Is. Please Do Not Hold It Against Them".

On 21 November 1974 Zappa was a guest DJ on radio station WSTM, Chicago, where he played Howlin' Wolf's "Going Down Slow". Zappa named Howlin' Wolf's "Who Will Be Next?" as one of his top ten favorite records in Faves, Raves And Composers In Their Graves, June 1975.

As a guest DJ on BBC Radio 1 during the Star Special (1980) Zappa played Howlin' Wolf's "I Asked Her For Water And She Brought Me Gasoline" with the following introduction: "And now, for another person with exquisite diction".

Quotes by Zappa about Howlin' Wolf

Did you have any friends at the time who shared your enthusiasm for Edgar Varèse?
No, but I would play it for them anyway. I mean, usually if they'd come over to the house, everybody does this same thing, if you have records, you tend to play your favorite items for whoever comes in. And that gives them the test to find out what kind of person that individual is. What I used to do was play them parts of the Varèse album and then play them Lightnin' Slim things like "My Starter Won't Start" or "Have Your Way" or I'd play them some Howlin' Wolf. That would clear them out really fast.