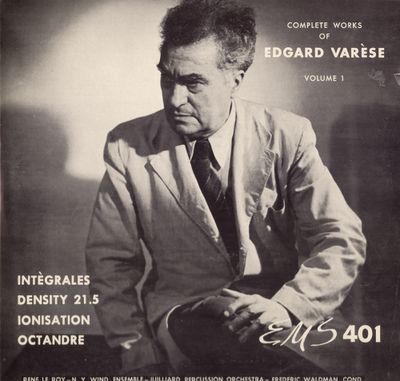 The Complete Works Of Edgard Varèse, Volume One, is a 1951 classical music album by Edgard Varèse, released on EMS (Elaine Music Stores), conducted by Frederic Waldman . It features the compositions Integrales, Density, Ionisation, Octandre and interpolations from Déserts.

Zappa and The Complete Works Of Edgard Varèse

Zappa bought the album in 1951 and played it grey. As he recalled in Zappa's letter to Varèse, 1958: "The whole thing stems from the time when the keeper of this little record store sold me your album "The Complete Works of Edgard Varèse, Vol.l." The only reason I knew it existed was that an article in either LOOK or the POST mentioned it as being noisy and unmusical and only good for trying out the sound systems in high fidelity units (referring to your "IONISATIONS"). I don't know how the store I got it from ever obtained it, but, after several hearings, I became curious and bought it for $5.40, which, at the time seemed awfully high and being so young, kept me broke for three weeks. Now I wouldn't trade it for anything and I am looking around for another copy as the one I have is very worn and scratchy. After I had struggled through Mr. Finklestein's notes on the back cover (I really did struggle too, for at the time I had had no training in music other than practice at drum rudiments) I became more and more interested in you and your music. I began to go to the library and take out books on modern composers and modern music, to learn all I could about Edgard Varèse. It got to be my best subject (your life) and I began writing my reports and term papers on you at school. At one time when my history teacher asked us to write on an American that has really done something for the U.S.A. I wrote on you and the Pan American Composers League and the New Symphony. I failed. The teacher had never heard of you and said I made the whole thing up. Silly but true. That was in my Sophomore year in high school."

In June 1971 Zappa wrote an article on how he discovered this specific album: Edgard Varèse: The Idol of My Youth. He recounts the same story but in a shortened version in The Real Frank Zappa Book. It's also discussed in Frank Zappa on Edgar Varèse (21 November 1981) and Frank Zappa: The SongTalk Interview, SongTalk, 1994.

Zappa named it one of his Top 10 Favorite Records in Faves, Raves And Composers In Their Graves, an article in Let It Rock, June 1975: "As it was the first album I'd ever heard of any of Varèse's music and it opened my eyes up to a lot of possibilities."

"In order to listen to The Album, I had to stay in my room. I would sit there every night and play it two or three times and read the liner notes over and over. I didn't understand them at all. I didn't know what timbre was. I never heard of polyphony. I just liked the music because it sounded good to me. I would force anybody who came over to listen to it. (I had heard someplace that in radio stations the guys would make chalk marks on records so they could find an exact spot, so I did the same thing to EMS 401 ... marked all the hot items so my friends wouldn't get bored in the quiet parts.)" - Zappa in Edgard Varèse: The Idol of My Youth, 1971.

In 2010 a re-release of this specific recording by Él and Cherry Red Records came with liner notes which specifically promote it as the album which made Zappa become a composer:

"For any listener encountering Frank Zappa's sprawling catalogue of works for the first time, one question soon arises. What is it that links the caustic dowop of an album like Cruising With Ruben & The Jets to such full on avant garde electro-acoustic works as Lumpy Gravy and Boulez Conducts Zappa: The Perfect Stranger? The answer is unexpectedly simple: Edgard Varèse. A genuine pioneer, ("I refuse to submit to sounds that have already been heard") Varèse is regarded now as "The Father of Electronic Music", a man described by Henry Miller as "The Stratospheric Colossus of Sound" and this set contains the very recordings made in 1950 that turned Zappa's musical world on its head."