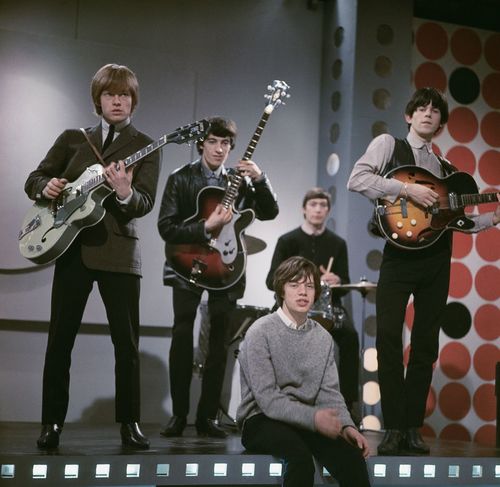 The Rolling Stones became a rival to The Beatles in popularity and fame, though with a more subversive, dangerous public image. During some of their concerts riots broke out.

References to The Rolling Stones in Zappa's music

Zappa and The Rolling Stones

Zappa often said that he preferred The Rolling Stones over The Beatles, because they were more blues-inspired. John Smothers was once a bodyguard for The Stones, while Gary Kellgren worked as an engineer for them. Robert Martin contributed to a Rolling Stones tour before he joined Zappa.

Mick Jagger visited Zappa in 1968 at The Log Cabin and helped him to pull a wooden splinter from his toe. This anecdote is described in The Real Frank Zappa Book. In Pauline Butcher's Freak Out! My Life with Frank Zappa, based on her diaries, Jagger visited on July 11, 1968 but only stayed 10 minutes.

Zappa liked The Rolling Stones album Between the Buttons (1967) and mentioned it as one of his Top 10 Favorite Records in Faves, Raves And Composers In Their Graves (June 1975). Zappa claimed that when he told Brian Jones how much he liked the album Jones discretely belched and turned away. In the sleeve of We're Only In It For The Money Zappa's speech balloon also says: "Between the badges".

Zappa played Paint It Black as a guest DJ on radio station WSTM, Chicago on 21 November 1974 and again as guest DJ on the Star Special radio show in 1980.

Both Mick Jagger and Keith Richards are mentioned and thanked in the liner notes of The MOFO Project/Object (2006) album. [1]

Zappa about The Rolling Stones

Interviewer: The best thing about the Rolling Stones was that they didn't do that very long.

Zappa: "Yeah, but when they did it, it was funky. It wasn't necessarily colored-sounding blues, but it was really funky."

Zappa: "And it was valid for that, except when they tried to do too much Chuck Berry."

"The success of the British groups forced a change in the way new American groups were put together. They now had to be self-contained, because every bar that hired live music wanted its own little U.S. version of the Beatles or the The Rolling Stones." - Frank Zappa in The Real Frank Zappa Book, 1989.

"I liked The Rolling Stones. (...) I did like his [Mick Jagger] attitude and the Stones' attitude. Ultimately, though, the music was being done because it was product. It was pop music made because there was a record company waiting for records." - Frank Zappa. Interview in Playboy, 2 May 1993.

"I generally liked the Rolling Stones better than the Beatles during that era; they were a little bit more to my taste because they were more involved in the blues." - Frank Zappa in: Frank Zappa: The SongTalk Interview, 1994, Vol. 4, Issue 1.