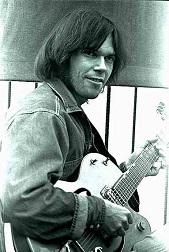 Neil Young is referenced in Billy The Mountain.

Zappa named Young's "After The Gold Rush" as one of his favorite records in Faves, Raves And Composers In Their Graves.

In an appropriately Zappa-esque moment, his 1997 live album Year of the Horse begins with Neil proclaiming, "They all sound the same! It's all one song!" before starting "When You Dance I Can Really Love."