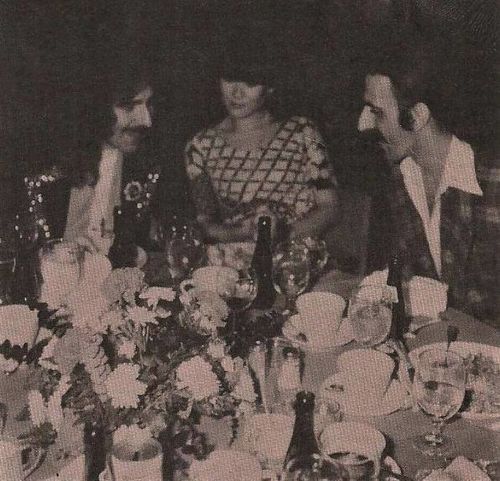 Black Sabbath are a UK heavy metal band from Birmingham, England, fronted by singer Ozzy Osbourne. They are one of the pioneers of metal and best known for songs like "War Pigs", "Paranoid" and "Iron Man".

On 6 December 1976 Black Sabbath performed at Madison Square Garden, NY, on their Technical Ecstasy Tour. Frank Zappa appeared on stage at this concert, reported as follows.

Whilst on his 1976 World Tour, FZ was interviewed at the Playboy Towers in Chicago by Miles Grey for New Musical Express, 4th Dec, 1976. An extract from this reads;

"Frank also has plans to learn three of Black Sabbath's numbers and to jam onstage with them at their December 6 Madison Square Garden gig - something cooked up between Zappa and one of the Sabs at Zappa's Third Annual Thanksgiving Banquet".

In a subsequent music press interview with FZ at The Hyde Park Hotel, UK, by Hugh Fielder for Sounds (9th September 1978), Fielder asked FZ what he was currently listening to, outside of his own work. Among the artists that FZ commented on were Black Sabbath. The editorial continues as follows:

HF: Still playing Black Sabbath, eh?
FZ: (Laughs) I like it. It's fantastic. 'Iron Man'. Are you kidding me? 'Iron Man'! That's a work of art. I'm really into that. I used to like 'Supernaught' but I think 'Iron Man' is the one now.
HF: Do you ever go and see bands live?
FZ: I saw them. I was on stage with them at Madison Square Gardens on their last tour. I was sitting on the side of the stage. I'd never seen them before. They had me sitting on a box over by the side (he bursts into uncontrolled laughter).
I was going to jam with them and they were supposed to call me up and tell me what time their soundcheck was, but I guess they didn't have one. So, I went down there to the show and they said "What are you going to play?" and they'd set up a mini wall of Marshalls for me. And I said "Shit, I'm not going to go out there without knowing what it's going to sound like". I said I'd just watch the show.
What happened was that Tony Iommi had some trouble with his guitar and decided to change his strings at the last minute. The audience had already been sitting there waiting for an hour or so since Ted Nugent, and they wanted me to go out there and make an announcement and calm them down. So I did. And I introduced them and then sat by the side of the stage over by Ozzy's orange juice (Laughs again).
HF: But you didn't play?
FZ: No, I just sat there and marveled at it (More laughter). I think it's great. Especially in a place like Madison Square Gardens with 20,000 people grunting and wheezing and shoving each other.

In Faves, Raves And Composers In Their Graves Zappa named Black Sabbath's song "Supernaut" as one of his favorite songs.

In 1980, Black Sabbath's 'Iron Man' was a track on the playlist during "Star Special", with FZ as a guest DJ on BBC Radio 1.

The band is mentioned in Dental Hygiene Dilemma: "Get your own group together! Heavy like Grand Funk or Black Sabbath!". Zappa also mentions Black Sabbath records in The "Real World" Thematic Extrapolations.