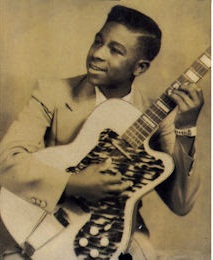 He turned up in New Orleans in 1950, influenced by the atomic guitar energy of Clarence "Gatemouth" Brown (also name-checked on the cover of "Freak Out!"). But Slim's ringing, distorted guitar tone and gospel-enriched vocal style were his alone. He debuted on wax in 1951 with a mediocre session for Imperial that barely hinted at what would soon follow. A 1952 date for Bullet produced the impassioned "Feelin' Sad", later covered by Ray Charles (who would arrange and play piano on Slim's breakthrough hit the next year). With the emergence of the stunning "The Things That I Used to Do" on Art Rupe's Specialty logo, Slim's star rocketed to blazing ascendancy nationwide. Combining a swampy ambience with a churchy arrangement, the New Orleans-cut track was a monster hit, pacing the R&B charts for an amazing 14 weeks in 1954. Strangely, although he waxed several stunning follow-ups for Specialty in the same tortured vein - "The Story Of My Life", "Something to Remember You By", "Sufferin' Mind" - as well as the blistering rockers "Well I Done Got Over It", "Letter to My Girlfriend", and "Quicksand", Slim never charted again.

No 1950s blues guitarist even came close to equalling the flamboyant Guitar Slim in the showmanship department. Armed with an estimated 350 feet of cord between his axe and his amp, Slim would confidently stride onstage wearing a garishly hued suit of red, blue, or green - with his hair usually dyed to match! It's rare to find a blues guitarist hailing from Texas or Louisiana who doesn't cite Slim as one of his principal influences; Buddy Guy, Earl King, Guitar Shorty, Albert Collins, Chick Willis, and plenty more have enthusiastically testified to Slim's enduring sway.

Slim's lifestyle was as wild as his guitar work; excessive drinking and life in the fast lane took its inevitable toll over the years. He died in 1959 at age 32 of pneumonia. Despite his early death he was a prime influence on Buddy Guy, Albert Collins, Jimi Hendrix, Stephen Stills, Stevie Ray Vaughan,...

Zappa mentioned Guitar Slim in his list of influences in the sleeve of Freak Out! (1966), under the heading: "These People Have Contributed Materially In Many Ways To Make Our Music What It Is. Please Do Not Hold It Against Them".

He named Slim's "The Story Of My Life" one of his Top 10 favorite records in Faves, Raves And Composers In Their Graves

Guitar Slim is also mentioned in "The Real Frank Zappa Book" (1989): "Don was also an R&B fiend, so I'd bring my 45s over and we'd listen for hours on end to obscure hits by the Howlin' Wolf, Muddy Waters, Sonny Boy Williamson, Guitar Slim, Johnny "Guitar" Watson, Clarence "Gatemouth" Brown, Don & Dewey, the Spaniels, the Nutmegs, the Paragons, the Orchids, the etc., etc., etc."

"I'm probably stylistically closer to Guitar Slim than anybody else. But since nobody knows what he did ...[laughter]. There's a couple of solos he played that I thought were landmarks – but they're very obscure." - Frank Zappa in Zappa's Inferno, interview for Guitar World, 1987.

"And I especially like Guitar Slim. His solo on "The Story Of My Life" (The Things That I Used To Do, Specialty) is one of the best early distorted guitar solos; it really sounds like he's mad at somebody." - Frank Zappa in One Size Fits All Interview.

Zappa: "I wouldn't say that Gatemouth sounded so blasphemous. Johnny "Guitar Watson" was an extremely evil-sounding guitar player at the time, but the smuttiest one I heard was Guitar Slim [Eddie Jones]... just pure smut. The thing that I liked about the two solos I heard when I was 16 that really intrigued me – the solo on "Three Hours Past Midnight" and the solo on "The Story Of My Life" – was not just the tone of the instrument but the absolute maniac way that he spewed out these notes in a phrase with little or no regard to the rest of the meter or what was going on, but still being aware of where the beat was. He was just yellin' it at you."

Interviewer': More like a voice, which is how you think about your own solo playing.

Zappa: "Yeah, I think that's the most direct way to communicate with somebody, using speech rhythms. That really makes a big difference. Because, if you listen to a guy playing nice neat scale patterns and things like that, no matter how skillful he is in making his stuff land on the beat, you always hear it as Music – capital "M" music – lines, chord changes, and stuff like that. Real studied. But if you want to get beyond music into emotional content, you have to break through that and just talk on your instrument, just make it talk. And if you're gonna make it talk, you have to be aware that there's a different rhythmic attitude you have to adopt in order to do that."

Interviewer: Playing off the beat, around it...

Zappa: "No, you don't say to yourself, "I'll now play off the beat." I don't know how to tell you how to do it. You just make it talk, and if you then go back and analyze those rhythms, you'll see that there's some really strange looking things on paper. You have to take the approach that what you're doing on your instrument is that without using your own mouth you are getting some kind of theoretical idea or an attitude that transcends the actual notes or harmony of the song. It goes beyond all that and gets right to some emotional point you want to get across. And that's what I appreciated about those early solos by Guitar Slim and Johnny "Guitar" Watson; there was no f*¢#ing around. They got right to the point."