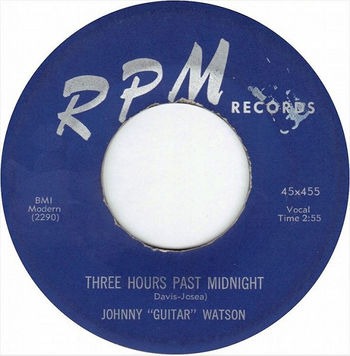 Three Hours Past Midnight is a 1956 song by Johnny "Guitar" Watson. It was one of the 10 records Zappa selected (in 1989) for the American radio show Castaway's Choice, hosted by John McNally. Zappa also said if he would have to narrow it down to one record his choice would be "Three Hours Past Midnight". He also mentioned this song during Faves, Raves And Composers In Their Graves. During the KPPC, Pasadena radio show, when Zappa was guest DJ, the song was one of three Watson tracks he played that broadcast.

"Watson's 1956 song, 'Three Hours Past Midnight' inspired me to become a guitarist."