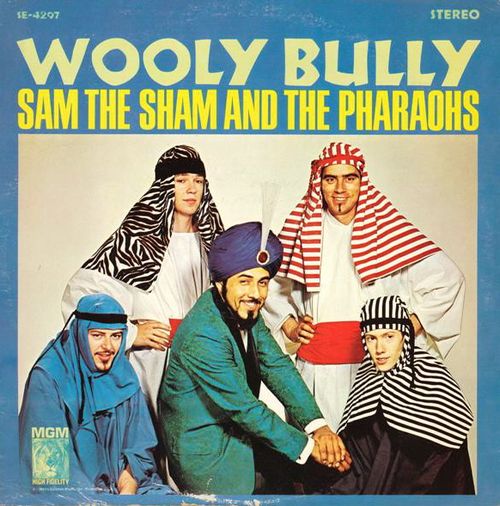 Wooly Bully is a 1965 hit song by Sam the Sham and the Pharaohs. It was their only success, making them a classic example of a one-hit wonder.

In the liner notes of Freak Out! (1966) Zappa compares the harmlessness of Wowie Zowie with Wooly Bully.

In The White Boy Troubles from Thing-Fish (1984) the line "Mattie told Hattie" from Wooly Bully is referenced. This particular line was a running gag during Zappa's 1984 tour. It was often uttered by Zappa when somebody sang a line wrong. One such instance happens during Denny Walley's performance of Tryin' To Grow A Chin on You Can't Do That On Stage Anymore Vol. 1. [1].

"We ... kept getting fired because we played anything other than "Wooly Bully" " - Frank Zappa about the early days of the Mothers of Invention, We Made Our Reputation Doing It That Way..., 1967, from Joe's Corsage.

"It's always been one of my favourite fantasies that songs like 'Wooly Bully' get written on a lunch bag in blue crayon." - Faves, Raves And Composers In Their Graves, June 1975, Let It Rock.

"I've heard a lot of that kind of music and there are always things in in that crack me up. There are things in Schoenberg that are equally funny as the words to Wooly Bully, but don't tell him that. (...) Last night I was playing one solo and decided right in the middle of it to play the melody line to Wooly Bully, one quarter note off. Instead of starting on one you start on two, and I played it at half the speed of the band – that's stupid. And in the middle of another thing I had part of Petrushka that just happened to appear on the lower A string for about two minutes." - Frank Zappa in Shut Up And Play Your Guitar , Interview by John Dalton, Guitar Player Magazine, May-June 1979.