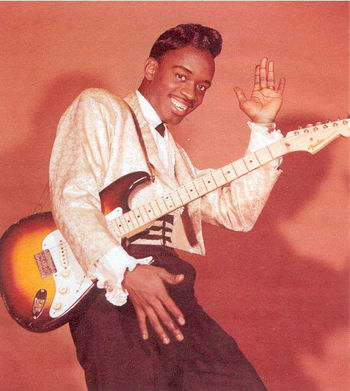 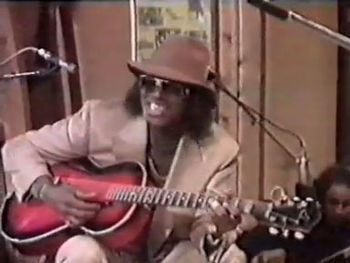 Johnny "Guitar" Watson in 1993, performing during a soiree at Zappa's home.

John Watson was taught music by his pianist father and, at the age of eleven, was given a guitar by his grandfather, a preacher, on condition that he never used it to play the blues. The family moved to Los Angeles around 1950. Winning local talent shows led him to work as a musician (guitar and piano) and vocalist with Jump blues style bands such as Chuck Higgins and Amos Milburn. Watson signed to the Federal label in 1954 and released "Space Jam" which featured innovative guitar effects using reverb and feedback. Watson once said: "I used to play the guitar standing on my hands, I had a 150 foot cord and I could get on top of the auditorium - those things Jimi Hendrix was doing, I started that shit!"

In 1954 Watson saw the musical western film "Johnny Guitar" and decided to adopt the title as his artistic pseudonym. Throughout the 1950s he continued to record and tour, working with the likes of The Olympics, Don & Dewey and Little Richard. During the 1960s he recorded with Andre Lewis for the Fantasy label. He had solo success with "Ain't That a Bitch" (1976) and "A Real Mother for Ya" (1977) albums for the DJM label. By the 1990s his work was being sampled by hip-hop artists like Snoop Doggy Dogg and Dr Dre. Watson's album Bow Bow (1994) entered the US charts at the time. In 1996 Watson died on stage. Etta James once said, as quoted on the Rhino Records site: “They call Elvis The King, but the sure-enough king was Johnny "Guitar" Watson."'

Johnny "Guitar" Watson was Zappa's main influence as a guitarist. Zappa writes in The Real Frank Zappa Book (1989): "Don was also an R&B fiend, so I'd bring my 45s over and we'd listen for hours on end to obscure hits by the Howlin' Wolf, Muddy Waters, Sonny Boy Williamson, Guitar Slim, Johnny "Guitar" Watson, Clarence "Gatemouth" Brown, Don & Dewey, the Spaniels, the Nutmegs, the Paragons, the Orchids, the etc., etc., etc." "Three Hours Past Midnight" was one of the 10 records Zappa selected (in 1989) for the American radio show Castaway's Choice, hosted by John McNally. Zappa also said if he would have to narrow it down to one record his choice would be "Three Hours Past Midnight". He also mentioned this song during Faves, Raves And Composers In Their Graves. During the KPPC, Pasadena radio show Zappa played three Watson songs: "Three Hours Past Midnight", "It's Hot" and "Guitar Player (Play Those Blues For Me". During Dr. Demento in December 1973 he played Watson's "Those Lonely Lonely Nights".

Watson recorded with Zappa on One Size Fits All (1975) and provided vocals on Thing-Fish (1984), Them Or Us (1984), Make A Jazz Noise Here (1991) and Have I Offended Someone? (1997). Watson performed guitar and vocals on Frank Zappa Meets The Mothers Of Prevention. Watson was also present during the soiree in 1993, partially broadcast during the BBC Television Tribute (1993).

When Zappa's family heard that Lou Reed would be inducting Zappa in the Rock 'n' Roll Hall of Fame in 1994, they suggested Johnny "Guitar" Watson as a better choice.

"Watson's 1956 song, 'Three Hours Past Midnight' inspired me to become a guitarist."

“Well, my original favorite guitar player was Johnny "Guitar" Watson, not from a technical standpoint but from listening to what his notes meant in the context in which they were played."

"Watson, he's the original minimalist guitar player. The solo on "Lonely Nights," the one-note guitar solo? Says it all! Gets the point across. I can remember guitar players in high school learning that solo and just going, "But how does he get it to sound that way?" It really was one note. If you can play that note against those chord changes and derive the same emotional impact that he got from playing that note, then you're onto something. He can make that one be so nasty. You know, like, "What's behind that note? What is the mode? Why are you continuing to play the tonic when the dominant chord comes around? Are you goin' like this [gestures with his middle finger in the F-you" position] with your playing or what?" You have to learn how to do that. (...)generally the people who write about music don't know music. Anybody can tell whether these four notes are faster than these four notes. But what does it take to listen to Johnny Guitar Watson's one note, and know that he's doin' that? Did you ever point that out to a reader? Did you ever get across that there's something more to it than rilly-rilly-ree?"

Zappa: "I wouldn't say that Gatemouth sounded so blasphemous. Johnny "Guitar Watson" was an extremely evil-sounding guitar player at the time, but the smuttiest one I heard was Guitar Slim [Eddie Jones]... just pure smut. The thing that I liked about the two solos I heard when I was 16 that really intrigued me – the solo on "Three Hours Past Midnight" and the solo on "The Story Of My Life" – was not just the tone of the instrument but the absolute maniac way that he spewed out these notes in a phrase with little or no regard to the rest of the meter or what was going on, but still being aware of where the beat was. He was just yellin' it at you."

Interviewer': More like a voice, which is how you think about your own solo playing.

Zappa: "Yeah, I think that's the most direct way to communicate with somebody, using speech rhythms. That really makes a big difference. Because, if you listen to a guy playing nice neat scale patterns and things like that, no matter how skillful he is in making his stuff land on the beat, you always hear it as Music – capital "M" music – lines, chord changes, and stuff like that. Real studied. But if you want to get beyond music into emotional content, you have to break through that and just talk on your instrument, just make it talk. And if you're gonna make it talk, you have to be aware that there's a different rhythmic attitude you have to adopt in order to do that."

Interviewer: Playing off the beat, around it...

Zappa: "No, you don't say to yourself, "I'll now play off the beat." I don't know how to tell you how to do it. You just make it talk, and if you then go back and analyze those rhythms, you'll see that there's some really strange looking things on paper. You have to take the approach that what you're doing on your instrument is that without using your own mouth you are getting some kind of theoretical idea or an attitude that transcends the actual notes or harmony of the song. It goes beyond all that and gets right to some emotional point you want to get across. And that's what I appreciated about those early solos by Guitar Slim and Johnny "Guitar" Watson; there was no f*¢#ing around. They got right to the point."