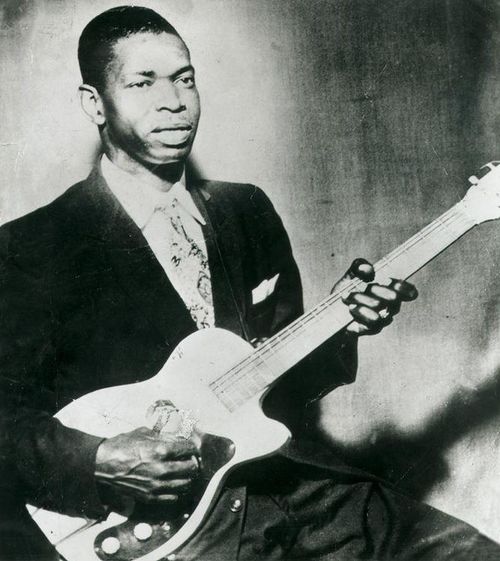 "Other examples of good guitar stuff from that era might include (...) "Happy Home" (Elmore James – even though Elmore tended to play the same famous lick on every record, I got the feeling that he meant it)" - Quoted from: Frank Zappa On... The '80s Guitar Clone, January 1987.

Interviewer: You said that even though Elmore James always played the same famous lick, you got the feeling that he meant it.

Zappa: "Well, he did. That stuff transcends music and gets into realms of language. It goes beyond good taste into religion." - Quoted from Frank Zappa, Musician, February 1994)

Musician: "In the essay you wrote for Guitar Player Magazine, you said that even though Elmore James always played the same famous lick, you got the feeling that he meant it."

Frank Zappa: "Well, he did. Here's what that stuff is like: It transcends music and gets into realms of language. The English language has a few idiosyncracies in the way catch phrases work. Like, "Well, excuuuuse me!" You know, Elmore James' lick could be his version of "Well, excuuuuse me!" then maybe a million guitar players want to go reedledeedeedelee-deedelee-deede/ee-deedee [laughs]. It transcends the music and gets into another realm – just the same way that "Well, excuuuuse me" doesn't mean excuse me, it means a whole other bunch of stuff that's not very specific but it's hovering in the atmosphere whenever you say it." - Quoted from Zappa, 79/8, August 1979.

"Well, Elmore James is an acquired taste, and I happen to really like Elmore James, and I like all blues-type guitar players and all that sort of stuff. I happen to think that what they play really means something, as opposed to most of what happens on most rock and roll records – it's very calculated sound effects that fit the song. But to say that a person has to start with Elmore James before he graduates up to fire-breathing guitar playing status is stupid, because you really don't need to. If you don't have any feeling for that type of music, why involve yourself with it? I would rather see a guitar player totally ignore that realm of music in an honest way – saying, "That's just not my stuff" – than get a cursory glance of it and say, "Now I understand it," because they'll just do a parody of it. You've really got to love that stuff. I really hope that one of these days that sort of blues comes back. Everything else comes back. And I think that kind of music is great." - Quoted from: I'm Different or Not Exactly Duane Allman, February 1983.

In December 1973, as a guest on Dr. Demento Zappa played "It Hurts Me Too" by Elmore James & The Broomdusters.

Zappa quoted Elmore James' "Dust My Broom" in The Adventures Of Greggery Peccary and Debra Kadabra.