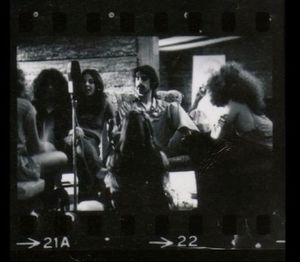 When we returned to California in 1968, we moved into a large log cabin, once owned by old-time cowboy star Tom Mix, at the corner of Laurel Canyon Boulevard and Lookout Mountain Drive.

The living room was seventy-five by thirty feet, with a huge fireplace. Close to a dozen people, mostly employees, lived there. The rent was seven hundred dollars a month.

Cal Schenkel had his own little art department in one wing of the house. In the basement was a one-lane bowling alley and enough space for the band to rehearse. It had two walk-in safes -- like bank vaults -- and a subbasement which had probably been a wine cellar. It was rustic and decrepit; it really looked like an old-time log cabin, with rough-hewn wood, bristling with splinters.