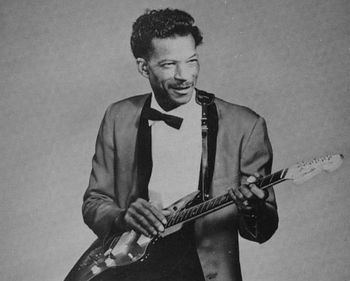 Lightnin' Slim (March 13, 1913- July 24, 1974) was an American blues singer and guitarist. His style was built on his grainy but expressive vocals and rudimentary guitar work, with usually nothing more than a harmonica and a drummer in support. Slim's music remained uniquely his own, the perfect blues raconteur, even when reshaping other's material to his dark, somber style. He also possessed one of the truly great voices of the blues; unadorned and unaffected.

Lightnin' Slim is listed in the sleeve of Zappa's debut album "Freak Out!" (1966) in the list of influences under the heading "These People Have Contributed Materially In Many Ways To Make Our Music What It Is. Please Do Not Hold It Against Them".

He is also mentioned in "The Real Frank Zappa Book" (1989):"There was a place in San Diego on the ground floor of the Maryland Hotel where you could buy R&B singles unobtainable elsewhere - all those Lightnin' Slim and Slim Harpo sides on the Excello label. (The reason you couldn't order them in the 'white-person record stores' was that Excello had a policy that if a store wanted to carry their R&B line, it also had to take their gospel catalog.) The only way I could get a Lightnin' Slim record was to travel a couple hundred miles and buy it secondhand, all scratched up."

His exhortation to "Blow your harmonica, son!" has become one of the great, mournful catchphrases of the blues. Zappa referenced this quote a few times, beginning with Trouble Every Day.

Zappa played Lightnin' Slim's song "Have Your Way" while he was a guest DJ at Dr. Demento's radio show in 1981. He told Demento that the guitar lick on the background of the song inspired him for the background music in Brown Shoes Don't Make It.

Quotes by Zappa about Lightnin' Slim

Did you have any friends at the time who shared your enthusiasm for Varèse?
No, but I would play it for them anyway. I mean, usually if they'd come over to the house, everybody does this same thing, if you have records, you tend to play your favorite items for whoever comes in. And that gives them the test to find out what kind of person that individual is. What I used to do was play them parts of the Varèse album and then play them Lightnin' Slim things like "My Starter Won't Start" or "Have Your Way" or I'd play them some Howlin' Wolf. That would clear them out really fast.

It's interesting that you mention these two separate currents because I was introduced to your work by a classical cello player who mostly listens to avant-garde 20th century music and you.
Well, he's missing a good bet by not checking out those old records by guys like Lonesome Sundown and Lightnin' Slim. That's good stuff because it's real direct, it's not a matter of pretense there. It's right to the point.