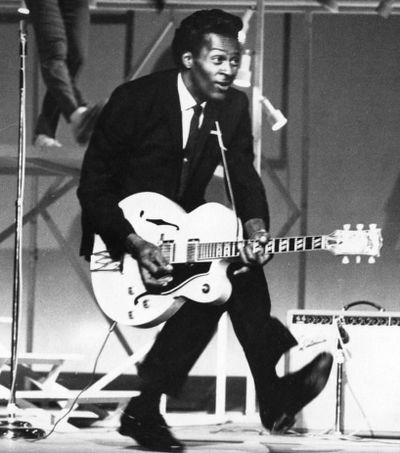 Berry was one of the pioneers of rock 'n' roll and influenced basically all rock guitarists since. Therefore he was among the first artists to be inducted in the Rock 'n' Roll Hall of Fame in 1986.

His song "Johnny B. Goode" is also the only rock song included on the Voyager Golden Record, sent into outer space in 1977.

Ruben And The Jets covered Chuck Berry's "Almost Grown" on their album For Real!. [1]

"Well, I used to like Chuck Berry when I was in high school. Songs like "Havana Mill" and "Wee Wee Hours" which were the flip sides of the hits that he had – the more bluesy things. His main innovation besides that duck walk choreography was the multiple string guitar solos – the lines were harmonizing because he was playing on two strings at once." (Zappa, quoted in The Frank Zappa Interview Picture Disk, pt.2)