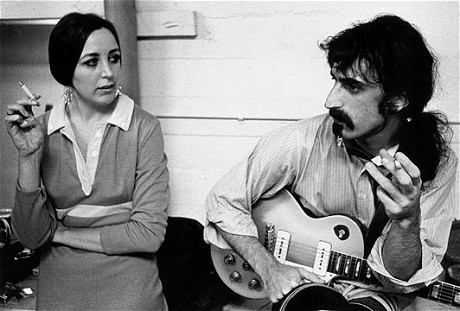 Pauline Butcher (after her marriage "Pauline Bird") is a British woman who was Zappa's secretary from 1968 to 1972.

She was hired during The Mothers' first European tour in 1968 to translate the lyrics from Absolutely Free. Her naivety in the music world (such as asking Eric Clapton what instrument he played?) appealed to Zappa and he asked her to work as his secretary. She moved out to The Log Cabin where, amongst her many duties, she ran the United Mutations fan club. Butcher also had a brief relationship with Cal Schenkel.

Pauline Butcher on the album cover of "We're Only In It For The Money".

She can be seen on the album cover of We're Only In It For The Money. [1] She is also visible in the sleeve of Uncle Meat as the woman shaving herself with a baby doll leg. [2]

Ill health forced her return to England in 1972. She has since worked as a teacher and a writer for theatre and radio.

On September 5, 2011 she released her autobiography, Freak Out! My Life with Frank Zappa.