One Size Fits All 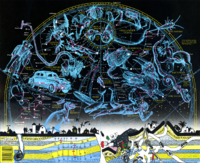 "The Frank I Remember": "I began working as Frank's recording engineer on January 3, 1975, when Kerry McNab (arguably the best engineer Frank ever had) began his slow withdrawal from the scene and subsequently from engineering entirely. Because of a contractual obligation to Kerry, Marty Perellis (Frank's then-manager) insisted on listing me as 'recordist' on the One Size Fits All LP, though I did much of the actual engineering. I went on to engineer all or part of six or so albums with Frank."