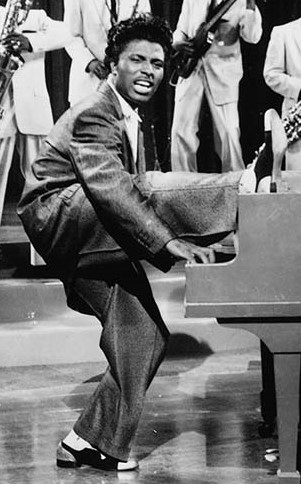 Little Richard (real name: Wayne Penniman) (December 5, 1932 - May 9, 2020) was an American rock 'n' roll musician, singer and pianist, famous for hits as "Tutti Frutti", "Good Golly Miss Molly", "The Girl Can't Help It" and "Slippin' and Slidin". He is considered one of the most influential and essential rock 'n' roll pioneers. Therefore, in 1987, he was one of the earliest musicians to be inducted in the Rock 'n' Roll Hall of Fame. [1]

At the funeral of Charles Brown Little Richard was among the honorary pallbearers.

The liner notes of Wowie Zowie joke that "Little Richard says he likes it."

Zappa covered his song Directly From My Heart To You on Weasels Ripped My Flesh (1970).

"After I moved into Studio Z, Don Van Vliet came to visit. I made some recordings with him then which predated the Beefheart Magic Band. The group was called The Soots. Some of the songs were (...) a cover version of the Little Richard song "Slippin' and Slidin' " (as if sung by the Howlin' Wolf)." - Frank Zappa in The Real Frank Zappa Book.