This is a bootleg box set from Italy. The box contains a 40 page color booklet which includes the Interview by Bob Marshall. Liner notes appear on the far right on every right-hand page - in the style of the YCDTOSA series. Band details are inaccurate (e.g. citing Bob Harris from 1971 and Bob Harris from 1980 as one and the same person).

A lot of these tracks (1-4, 6-7, 10, 12-13 and 15) have been officially released on The Lost Episodes, You Can't Do That On Stage Anymore #5, and Mystery Disc. The sound quality is always a lot better on the official releases, but here are some other differences:

Tracks 1-2 are slightly slower/lower here - about one half step down.
Track 4 has a slightly longer fade-out.
Track 12 is a different, shorter edit on Mystery Disc.


As for the other tracks:


Track 5 is a real oldie from 1962 (officially released on the Grandmothers' album Looking Up Granny's Dress)
Tracks 8-12 taken from I Was A Teenage Maltshop (Bootleg Album) and Confidential
Parts of track 8 released on Mystery Disc (called I Was A Teenage Maltshop and The Birth Of Captain Beefheart)
Track 9 has been officially released (in a shorter edit) on Mystery Disc as Original Mothers At The Broadside (Pomona); the song they're playing is "Louisiana Blues" by McKinley Morganfield, aka Muddy Waters
A small fragment of track 11 has been officially released on Mystery Disc, as Original Mothers Rehearsal
Track 14 is an alternate take of Dwarf Nebula Processional March & Dwarf Nebula from Weasels Ripped My Flesh, recorded at Apostolic Studios, New York
Track 16 is a live improvisation from a New York TV show called The Bitter End in 1967 (Hieronymus Bosch was a 15th/16th-century painter from the Netherlands, who painted monstrous allegorical images)
Track 17, a Ruben-esque tune sung by Roy Estrada, is a BBC TV recording from 1968
Track 18 appears to be a Remington electric razor commerical, and is featured on the Remington Electric Razor bootleg
Tracks 19-20 are live at the Olympic Auditorium, Los Angeles, 07-Mar-1970, taken from the bootleg Frank Zappa & Hot Rats At The Olympic

On the paper insert, Down In De Dew is listed as Duck Duck Goose, but in the liner notes, "Down in the Dew" and "Duck Duck Goose" are BOTH listed, pushing the track numbers ahead a number. Only "Down In De Dew" appears, however. Track 8 has been officially released on Läther. As for the other tracks:


Track 1 is from 1970, maybe from Butte, Montana - it can also be found on Beyond The Fringe Of Audience Comprehension.
Track 2 is a 1971 excerpt from Billy The Mountain, the same as on Randomonium and Cuccurrullo Brullo Brillo. It's a live recording, but there has been speculation that there are some overdubs on it.
Track 3 is taken from the Remington Electric Razor bootleg; it's an out-take from 200 Motels, really called What's The Name Of Your Group?. It includes the intro to German Lunch on You Can't Do That On Stage Anymore #5, which followed immediately after it on the original bootleg.
Tracks 4 and 5 have been officially released on The Lost Episodes, but in shorter edits: RDNZL is 4:11 here (22 seconds longer than on The Lost Episodes), and the fade-out in Inca Roads is a couple of seconds longer, too, but the sound is better on The Lost Episodes. RDNZL includes a bit of guitar soloing by Zappa.
Track 6 live at the War Memorial Gym, Vancouver, 01-Oct-1975.
Track 7 is a KCET-TV recording from 6/7-Aug-1974 (broadcast in December), which first appeared on the bootleg A Token Of His Extreme (better sound there).
Tracks 9-10 from the Saturday Night Live TV show: track 9 from 11-Dec-1976 (with comedian John Belushi) and track 10 from 21-Oct-1978.
Track 11 is a version with the Mike Douglas Show band (from a 1976 TV show) backing Frank Zappa.
Track 12 has been officially released on The Guitar World According To Frank Zappa, as A Solo From Heidelberg (Eppelheim 24-Feb-1978); it's from the song Yo' Mama.
Track 13 taken from the Zurkon Music bootleg (Halloween 1977, The Palladium, New York): it was officially released on the guitar-solo album Trance-Fusion.
Tracks 14 and 15 taken from the Remington Electric Razor bootleg. Track 14 (source unknown, February 1977) is surrounded by additional dialogue on Remington Electric Razor, which has been edited out here. The first 4:08 of Track 15 is Moe's Vacation (an early version of Mo 'n Herb's Vacation in a basic arrangement), the rest is The Black Page #2. It is from Poughkeepsie, 21-Sep-1978.

Track 1 is live at Stonybrook, New York, 15-Oct-1978. Track 2 is taken from the bootleg Remington Electric Razor. It's from the late show in Santa Monica on 11-Dec-1980 - a soundboard recording.
Track 3 is a soundboard recording from the second show in Pittsburgh 13-Nov-1980 (from Good Grief!). It has "vocals", in the sense that Ike and Ray sing Heavy Duty Judy in the very beginning over the riff.
Tracks 4-8 are taken from the Crush All Boxes version presented in the Mystery Box.
Tracks 9-11 are from The Ritz in New York, 17-Nov-1981, as on the bootleg Assault on New York - The Toxic Shock Trilogy Part III: Clowns on Velvet. Al DiMeola guests on track 11. This Is My Story was originally recorded by Gene & Eunice, with Johnny's Combo (Johnny was Johnny Otis, the inspiration for Zappa's moustache) on the Alladin label (3282), 17-Feb-1955, and peaked at #8 on the R&B chart 21-May-1955.
Track 12 is a 1981 studio version (taken from the Demos bootleg).
Track 13 is from Hollywood 22-Jul-1984, with George Duke and Johnny "Guitar" Watson guesting. It's the same performance as on the bootleg All You Need Is Glove, but from a different source tape. Whereas the All You Need Is Glove version is a soundboard, this sounds poor, and also has a minute or so of "banter" before the song starts.
Track 14 is live in Santa Monica, 11-Dec-1981 (early show). Someone throws food on stage; Zappa stops the song and makes him eat it.
Tracks 15-16 are a live medley in Springfield 13-Mar-1988, with the original Beatles lyrics changed to ridicule the disgraced TV evangelist Jimmy Swaggart.
Track 17 is live in Burlington 12-Mar-1988.

Track 1 is an excerpt from the film The World's Greatest Sinner, which Zappa scored in 1961. The film music was played by the Pomona Valley Symphony Orchestra, conducted by Fred E. Graff, and the parts of Satan (the narrator) and Clarence "God" Hilliard were played by Paul Frees and Timothy A. Carey, respectively. It's taken from the Serious Music bootleg.
Track 2 is taken from the Zut Alors bootleg. The piece was originally recorded in 1967 for an unreleased single, which was planned for release on Capitol Records together with the all-orchestral original version of Lumpy Gravy.
Track 3 is taken from the bootleg The Ark (Boston, 08-Jul-1969).
Track 4 is the last part of the CD version of Didja Get Any Onya? from Weasels Ripped My Flesh - a spring 1969 recording, exact date and location unknown. It appears on We Are the Mothers & This Is What We Sound Like!, which is both an unreleased album and a bootleg. It has a few seconds at the end that are not on the Weasels CD.
Track 5 has been officially released (in a shorter edit) on Läther, as a bonus track. This longer version is taken from the Serious Music bootleg.
Tracks 6 and 7 were recorded at the "A Zappa Affair" concert at the Zellerbach Auditorium at UC Berkeley, 16-Jun-1984, played by the Berkeley Symphony Orchestra, conducted by Kent Nagano. This is the only time Sinister Footwear has been performed in its entirety, and Zappa was most unhappy with the results. The ballet consisted of giant puppets with dancers inside them. It's taken from the bootleg Serious Music, and the Serious Music entry has a list of the titles of the 21 parts of the piece.
Track 8 is a 1986 synclavier version taken from an 8" flexi disc issued with Keyboard Magazine.
Track 9 is a 1985 synclavier version, source unknown. 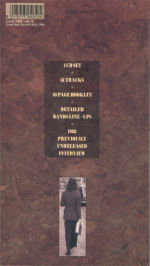 Excerpts from Apocrypha have been released as That's My Girl and Whipping Post (Bootleg Album) It is important to note that although much of Apocrypha has been officially released on The Lost Episodes and Mystery Disc, the versions on Apocrypha are often slightly longer.