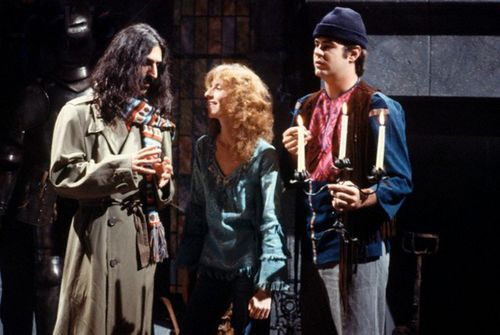 Saturday Night Live is an American TV comedy and variety show based in New York City that has been broadcast by NBC on Saturday nights since October 11, 1975. 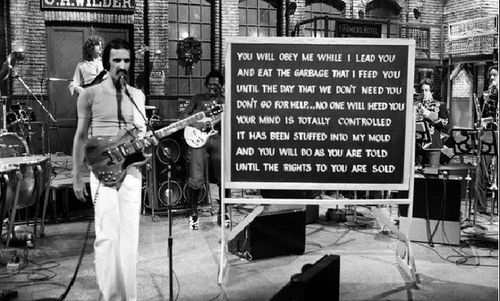 Zappa during a performance of I'm The Slime in Saturday Night Live.

Zappa was allegedly "banned" from the show due to his mugging to camera and pointedly reading from cue cards:

"It's a very difficult thing to do; they never make it easy on anyone who hosts the show. All the direction and attention goes to the sketches. They're not called skits--they become 'incensed' if you call them skits--and it's all designed to accommodate the people who are regulars on the show, so anybody who goes on there to hosts is at a severe disadvantage. Because they never tell you what camera is on, and you're not supposed to memorize your script because they're rewriting right up to show time. And so you're looking at the cue cards, and unless you're used to acting live on TV, you haven't got a prayer; you'll be looking at the wrong camera. It was really hard. And the other thing that happened was--and I didn't find out about it until the day after the show--that the first day I went there for the meetings with them they didn't like me and wanted to get rid of me. But no one said anything to my face while I was working on the thing. So they had written dialogue for me to say that I wouldn't normally say; they wouldn't let me write any of my own stuff. I think I'd be a fantastic television personality. I think I'd be a real good interviewer if I had a talk show, or a variety show. I'd be really good at it. But just to get up there and be the dumbbell in 'A Night On Freak Mountain'... I mean, sure, I'll do that for a laugh, but I'm not gonna build a life on it."

"(...) We were doing the Coneheads scene, which Frank loved. We were all in position to do it when Frank, said, 'What am I supposed to do? Read these cards?' It totally broke the reality; it was awful. (...) Maybe he thought he was above the whole thing or he was nervous or he didn't like the script. Maybe he thought he was being funny. But in fact the audience sort of gasped."

Records Of This Show

Dana Carvey appeared as Zappa in a sketch on the May 12, 1990 edition.

One of the regular skits on "Saturday Night Live" were the Coneheads, a family of extraterrestrial aliens from the planet Remulak stuck on planet Earth, whose heads were alle cone shaped. Later Zappa wrote a song called Conehead. The Coneheads were also the subject of a 1993 live action comedy film called "Coneheads".