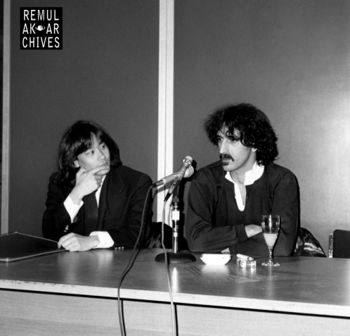 In the early 1980s Nagano was the conductor of the Berkeley Symphony Orchestra. When he heard that Pierre Boulez would conduct some of Zappa's works he was surprised as he had considered Zappa a rock musician. In December 1981 Zappa performed in San Francisco and Nagano tried to contact him to get some partitures of his work. Zappa invited Nagano backstage at the concert and showed him the partitures, which Nagano was allowed to take home with him. Impressed by the complexity and originality of the works Nagano offered to conduct them.

Nagano then conducted the London Symphony Orchestra (augmented by David Ocker (clarinet), Chad Wackerman and Ed Mann (percussion), performing Zappa's music at the 'Barbican Theatre', London, UK on 01/11/1983, and the Berkeley Symphony Orchestra performing "A Zappa Affair" concert, with choreography by giant puppets, on June 15 & 16, 1984, at the 'Zellerbach Auditorium', Berkeley, CA. From 2006 on he appointed conductor and musical director of l'Orchestre Symphonique de Montréal (OSM).

Nagano was one of the many celebrities who wrote a homage to Zappa in the "Guitar Player Presents"-special in 1992. He is also thanked for his "very special but no less significant contributions" in The Yellow Shark liner notes.