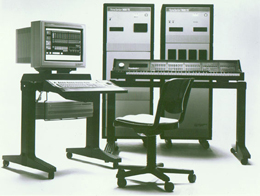 "With a Synclavier, you push a button and you get a finished composition which, I'd say, is every composer's dream."

"The Synclavier System was an early digital synthesizer and sampler, manufactured by New England Digital. First released in 1975, it proved to be highly influential among both music producers and electronic musicians, due to its versatility, its cutting-edge technology and distinctive sound.

First developed at Dartmouth College, the Synclavier was one of the first synthesizers to completely integrate digital technology. It used FM synthesis as well as sampling in order to create sounds, which were stored on large, magnetic disks. It was often referred to, by New England Digital and others, as the "tapeless studio," due to one's ability to compose and produce an entire song, solely on the Synclavier. Synclavier Systems were expensive – the highest price ever paid for one was about $500,000, although average systems were closer to about $200,000 – $300,000. Although this made it inaccessible for most musicians, it found widespread use among producers and professional recording studios, and it competed in this market with other high-end production systems, such as the Fairlight CMI."

Zappa Albums & Side Projects mainly realized with the Synclavier