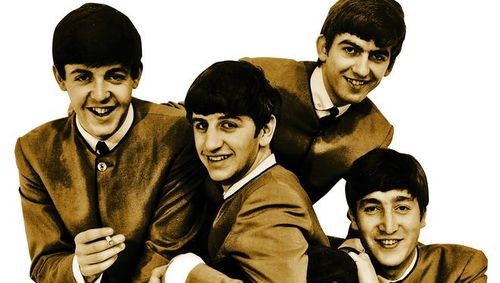 The Beatles were a world famous and popular British rock band. They were active from 1962 to 1970 and hugely influential in the development of popular music. Their innovative music featured new experimental sounds which still managed to interest their international audience. Bandmembers John Lennon, Paul McCartney, George Harrison and Ringo Starr wrote a huge string of much covered hit songs together, including "Please Please Me", "A Hard Day's Night", "Can't Buy Me Love", "Help!", "Strawberry Fields Forever", "Penny Lane", "A Day In The Life", "All You Need Is Love", "I Am The Walrus", "Hey Jude" and "Let It Be". No other group ever managed to appeal both fans of mainstream and alternative music on that scale. Apart from their music The Beatles' fashion (haircuts, Beatle Boots),...) and attitude also inspired an entire generation.

Zappa mentions the Beatles manager Brian Epstein in the Freak Out! list. Paul McCartney later cited "Freak Out!" as the main inspiration for their album Sgt. Pepper's Lonely Hearts Club Band. In his turn Zappa parodied the cover of this Beatles album on "We're Only In It For The Money" (1968). Zappa phoned McCartney to ask for permission.

The song Oh No is lyrically a direct attack on "All You Need Is Love": "You say that love is all we need/you say with your love you can change all of the world/all of the hate"

John Lennon and Yoko Ono performed with Zappa in 1971. The same year Ringo Starr acted in Zappa's 200 Motels (The Film) as Larry the Dwarf. The song Dental Hygiene Dilemma references the group again: "It's the same mysterious and exotic oriental flagrance as what the Beatles get off on."

Zappa played I Am The Walrus during "Star Special", when Zappa was guest DJ on BBC Radio 1 in 1980. He named this song, along with Paperback Writer and Strawberry Fields Forever his three favourite Beatles songs.

Zappa said in Frank Zappa Talks Of Faves, Raves And Composers In Their Graves that he admired the production on Abbey Road, not the material itself. When Allan MacDougall told Zappa during the Zappa – Outrageous Star interview that his favourite lyrics of all time were "And in the end the love that you take is equal to the love you make" on Abbey Road, Zappa told him: "That's absolute garbage. There's no such thing as love!"

Zappa covered "I Am The Walrus" during his 1988 tour and parodied Norwegian Wood, Strawberry Fields Forever and Lucy In The Sky With Diamonds, changing the lyrics so that they would mock Jimmy Swaggart. Due to copyright issues these songs can only be heard on bootleg copies. (See Texas Medley)

The "Beatle Boots" are mentioned a few times as conceptual continuity, including during the song Joe's Garage (Track).

John Lennon, Paul McCartney, George Harrison and Ringo Starr Cage were mentioned and thanked in the liner notes of The MOFO Project/Object (2006) album. [1]

Zappa about The Beatles

Matty Biberfeld: What do you think about the, uh … current state of Rock & Roll, this Psychedelic Rock, Blues Rock, Folk Rock … uh …
FZ: Poop Rock!
MB: … all kinds of Rock, and, uh, now the Beatles are coming … are coming up with songs which, to some people, are putting on the audience. The new, uh, single …
FZ: You don't think the Beatles have always put on their audience?
MB: Well now, more blatantly, I think, I was …
FZ: What could be more blatant than "I Wanna Hold Your Hand"?
MB: Well, you have heard the new Beatles, uh …
FZ: I have the new Sgt. Pepper album.
MB: Sgt. Pepper.
FZ: I'd like to thank them very much for doing a wonderful take-off on Freak Out! during the song about Rita, the meter-maid. I thought that it was very clever to have people wheezing, huffing and panting in the background with the music still going on.

- Quoted from "Poop Rock" on The MOFO Project/Object (Deluxe Edition).

"Everybody else thought The Beatles were God! I think that was not correct. They were just a good commercial group. I preferred The Monkees." - Quoted from The Fabulous Furry Freak Brother! interview in Classic Rock, December 2012, by Mick Wall.

"I didn't hate them. I actually like two or three of their songs. I just thought they were ridiculous. What was so disgusting was the way they were consumed and merchandised. No music has succeeded in America unless it was accompanied by something to wear, something to dance or a hairdo. A phenomenon is not going to occur unless you can dress up to it. - Frank Zappa about The Beatles, interviewed in Classical Zappa.