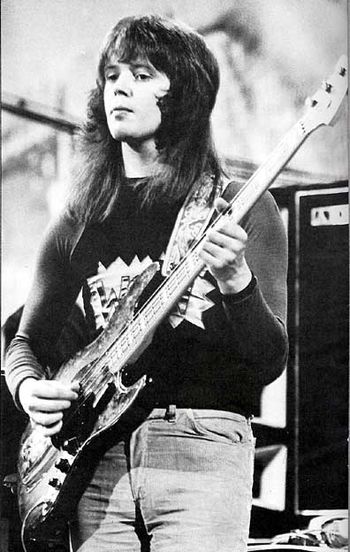 Martin Lickert (19 May 1948 - 13 March 2006) was a British man who worked as an office boy for The Beatles at Apple Records in the late 1960s. He later became the personal driver and chauffeur of Ringo Starr. In the 1980s he became bookmaker and horse-owner, and then a barrister. [1]

In 1971 Lickert left Ringo's limousine to buy tissues for him (many sources claim it were cigarettes, but this is contested by Lickert [2]), when he entered the room where Frank Zappa was contemplating who would replace Jeff Simmons's role in the film 200 Motels (The Film) after Simmons just left the band? Zappa had just told everybody that "the next person to walk through that door would play Simmons' part" and thus Lickert replaced him.[3] As it so happened he could play bass a bit and thus he sings and performs some bass and vocals in the movie and the 200 Motels soundtrack. His contributions can also be heard on Playground Psychotics (on the track I Could Be A Star Now) and be seen in Video From Hell and The True Story Of 200 Motels. However, in an interview Lickert said: "We played and recorded it live, but whoever was doing the mixing and whoever was doing the sound job clearly wasn’t listening very closely to the bass parts. So I think Frank in fact overdubbed most of it. For someone of my limited ability, some of the stuff on that album is pretty difficult." In the same interview he recalled Keith Moon smashing in his window to get Lucy Offerall in his room, because she "had the hots for him." [4]

After the film was finished Lickert was offered to tour with the Mothers of Invention in the United States, but declined. Lickert: "I never played any live gigs with The Mothers and I suppose that is one reason that they are still held in such high regard... my ability as any sort of guitarist has to be questioned". [5]

"What do you do? You join the Mothers and you end up working for Zappa! And he makes you be a creep! You could have played the blues with John Mayall, or far-out exciting jazz with Blood, Sweat & Tears." - Martin Lickert, in 200 Motels (1971), also heard on the track I Could Be A Star Now on Playground Psychotics.