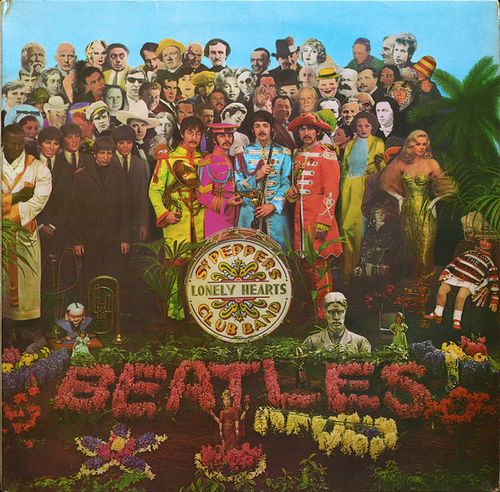 Sgt. Pepper's Lonely Hearts Club Band is a 1967 album, recorded by The Beatles. It is not only one of the best-selling albums of all time, but also one of the most influential. It showed the Beatles with a new public image. The famous photo collage cover has become iconic and depicts Marilyn Monroe, Marlon Brando, Lewis Carroll, Laurel & Hardy, Karlheinz Stockhausen, Aleister Crowley, Fred Astaire, Mae West, Karl Marx, Johnny Weissmuller, George Bernard Shaw, Bob Dylan, Albert Einstein, among others, and (hidden behind George Harrison) Tim Carey. The record is most famous for the title track, With A Little Help From My Friends, Lucy In The Sky With Diamonds, She's Leaving Home and A Day In The Life.

In an interview Paul McCartney claimed that Sgt. Peppers was influenced by Zappa's Freak Out!.

"I have the new Sgt. Pepper album. I'd like to thank them very much for doing a wonderful take-off on Freak Out! during the song about Rita, the meter-maid. I thought that it was very clever to have people wheezing, huffing and panting in the background with the music still going on."

- Frank Zappa on the track "Poop Rock" on The MOFO Project/Object (Deluxe Edition).

"I liked Sgt Pepper, but I just didn't like the cover. It represented the Beatles in a state of flux between their mop top image and their flower power phase, and whatever they are into now. Our sleeve was an exact negative of theirs. Like they had blue skies, and we had a thunderstorm, and the positions of the people was different. All the group faces backwards, and only the road manager faces the front. I think our cover is a work of art. The guy who did is a fantastic draughtsman, as evidenced by the forgery of the dollar bill on the inner sleeve. But it was an element of satire that was not appreciated.The cover cost four thousand dollars before printing and people said: 'Ah, it's just a copy of the Sgt. Pepper cover.' I was really proud of that cover. I don't give a – if people don't like it. That was really a work of pop art, down to the insincere smiles on our faces."

Frank Zappa: "Well, let me tell you of a few interesting coincidences that I've noticed, that lead me to suspect that we're making more of an impact on the industry than the people in the industry would like to admit. I was mailed a picture of Paul McCartney many months ago, from a girl in Europe, with my mustache and my tie, with my earphones, conducting an orchestra. And this is about the time I was preparing an album for Capitol where I was conducting an orchestra."

What do you mean, your earphones? I don't understand.


Zappa: "I mean, that's the way I ... it looked like me in the studio and I really shit in my pants when I saw it. I've never met them. It was a bizarre coincidence. And like him conducting the orchestra on their recent album [Sgt. Pepper]. I don't know how much that amounts to, because the orchestra is used as an effect."

Have you listened to that album carefully?

Do you think there is any similarity between Lovely Rita, Meter Maid and certain parts of Help, I'm A Rock?


Zappa: "The way they're doing "huffa-puffa, huffa-puffa" in the background? Yes, I do, as a matter of fact. There's also a coincidence in the use of Sgt. Pepper's Lonely Hearts Club Band as a reprise and the way we do America Drinks and Goes Home on Absolutely Free."

Was your album released at the time that they were preparing Sgt. Pepper?

Zappa: "Do you know when Absolutely Free was recorded? It was recorded before Thanksgiving last November. Before we came to New York."

What kept it from being released earlier? Was it the censorship problem?

Do you think that the Beatles would have had access to that?


Zappa: "I don't know. Yes, it's possible, because rumors in the industry have a tendency to go very fast. And on The Rolling Stones' album, Between the Buttons, they've got that camp song Something Happened to Me Yesterday. But we recorded ours before theirs; though theirs was released before ours."