The Monkees were an American pop group who were popular from 1966 until the end of the decade. They were the stars of their own surreal comedy TV show and obviously inspired by The Beatles. They scored hits like "I'm A Believer", "(I'm Not Your) Steppin' Stone", "Daydream Believer" and "Last Train to Clarksville".

While presented as a band, the members actually playbacked during most of their performances. Most of their shows centered more on sketches and skits than music too, with Rodney Bingenheimer acting as a double for Davy Jones. This made them controversial among many fans of real music. [1] Nevertheless The Beatles themselves liked them. But after their third album the Monkees rebelled against their producers and managed to win their independence. They started recording their own music in their own style. [2] After their show was cancelled in 1968 their popularity gradually sank away.

In the mid-1980s, though, old episodes of The Monkees were rebroadcast on MTV, which launched a revival. At this point the Monkees gained more respect from music fans too. 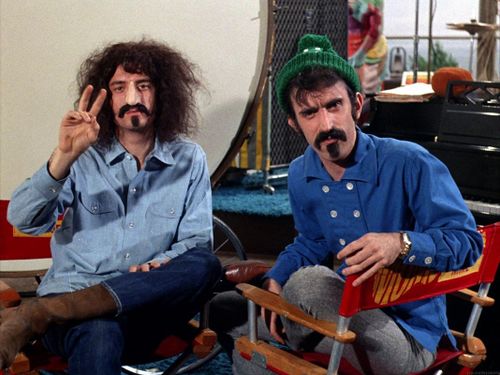 Zappa surprised quite some people by sympathizing with the Monkees and even appearing in a few of their projects. He appeared in The Monkees' TV series in the episode "The Monkees Blow Their Minds" (air date: March 11, 1968). There he appears in a sketch were Monkee Mike Nesmith interviews him. Zappa asks Nesmith if he can be "Mike Nesmith"? Nesmith agrees but only on the condition that he can be Zappa. In bad disguise the interview continues. A later segment shows Zappa "playing" a car by beating it into submission. This is done in a Monkees-style montage to the Zappa song Mother People.

Zappa about The Monkees

- Jerry Hopkins: You once told Davy Jones of The Monkees you liked Monkees music better than anything you'd heard from San Francisco. Were you serious?

Zappa: I said most of what they recorded sounded better. People think San Francisco rock is supposed to be cosmic value and all that, but it is manufactured music and manufactured music is worthless. Monkees music is manufactured, too, of course, and I'd like to say at this point: they're worth about the same, except the Monkees records sound better produced. - Quoted from Rolling Stone, issue #14, 1968.

- "Swooning to Kay Kyser is roughly equivalent to squealing for the Monkees or drooling over Jimi Hendrix. In each case the swoonee, squealee, or droolee is responding to the music in a manner which he feels is reasonably acceptable by current social standards in his peer group." - Quoted from The Oracle Has It All Psyched Out, Zappa for Life, 28 June 1968.

- "Everybody else thought The Beatles were God! I think that was not correct. They were just a good commercial group. I preferred The Monkees." - Quoted from The Fabulous Furry Freak Brother! interview in Classic Rock, December 2012, by Mick Wall.