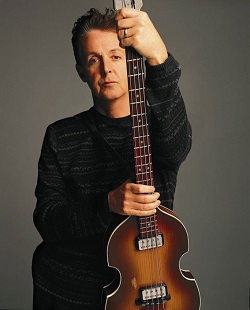 Paul McCartney (1942) is a British rock singer and bassist, best known as a member of The Beatles.

McCartney cited Freak Out! (1966) as a direct influence on The Beatles' Sgt. Pepper's Lonely Hearts Club Band (1967). Later Zappa parodied the cover of "Sgt. Peppers" on We're Only In It For The Money and asked McCartney for permission. McCartney was surprised and told Zappa that he should talk to his lawyers. While their lawyers discussed the issue together it took several months before the album was finally able to come out.

In 1980 McCartney made a music video for his song "Coming Up". He dressed up as several celebrities, including a saxophonist with long black hair and a moustache. At the time many people thought this person was supposed to be Zappa, but McCartney later denied this.

Paul McCartney was mentioned and thanked in the liner notes of The MOFO Project/Object (2006) album. [1]