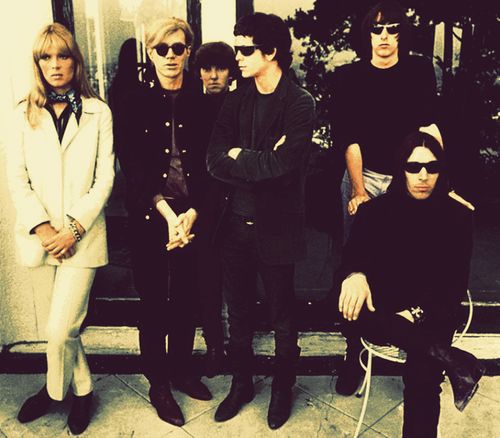 The Velvet Underground was an American rock band formed in New York City. Active from 1965 to 1973, their best-known members were Lou Reed and John Cale, who both went on to find success as solo artists. The group was produced by Tom Wilson and Andy Warhol, who also designed the cover of their first album, The Velvet Underground & Nico (1967).

They should not be confused with The Velvets.

Zappa and the Velvet Underground

On May 3, 1966 at the Trip, Los Angeles The Mothers opened for The Velvet Underground.

Jimmy Carl Black recollections of The Velvet Underground: "I don't remember Zappa actually putting them down on stage, but he might have. He really disliked the band. For what reasons I really don't know, except that they were junkies and Frank just couldn't tolerate any kind of drugs. I know that I didn't feel that way and neither did the rest of the Mothers. I thought that they were very good, especially Nico (whom I secretly fell in love with or was it lust?). I especially thought that Moe was a very good drummer, because in those days I don't recall there being any other female drummers on the scene. The thinking of the audiences was completely different than those from New York City. They were lukewarmly received." [1]

On October 23, 1967, in New York, singer Nico sang with The Velvet Underground. Chris Darrow of the magazine "Kaleidoscope" recalled: "The opening night was very crowded and Zappa and members of the Mothers of Invention showed up to show their support. (...) Nico's delivery of her material was very flat, deadpan, and expressionless, and she played as though all of her songs were dirges. She seemed as though she was trying to resurrect the ennui and decadence of Weimar, pre-Hitler Germany. Her icy, Nordic image also added to the detachment of her delivery. (...) The audience was on her side, as she was in her element and the Warhol contingent was very prominent that night. However, what happened next is what sticks in my mind the most from that night. In between sets, Frank Zappa got up from his seat and walked up on the stage and sat behind the keyboard of Nico's B-3 organ. He proceeded to place his hands indiscriminately on the keyboard in a total, atonal fashion and screamed at the top of his lungs, doing a caricature of Nico's set, the one he had just seen. The words to his impromptu song were the names of vegetables like broccolli, cabbage, asparagus... This "song" kept going for about a minute or so and then suddenly stopped. He walked off the stage and the show moved on. It was one of the greatest pieces of rock 'n roll theater that I have ever seen." [2]

On the original LP version of We're Only In It For The Money (1968) Gary Kellgren spoke the line: "I get to work with the Velvet Underground, which is as shitty a group as Frank Zappa's group." On the CD release this line was cut.

In an interview with Frank Kofsky for Jazz & Pop Magazine, October 1967, Zappa claimed he liked the first Velvet Underground album. "I liked that album. I think that Tom Wilson deserves a lot of credit for making that album, because it's folk music. It's electric folk music, in the sense that what they're saying comes right out of their environment." And in 1980 during the Star Special radio special on BBC Radio 1 Zappa selected a song by The Velvet Underground as one of his personal favorites: "All Tomorrow's Parties". Another song he liked was "Femme Fatale".

Interviewed by Mojo Magazine Lou Reed revealed that during the recording of The Velvet Underground's album White Light/White Heat (1968) Zappa and the Mothers were recording at the same studio. Reed said that the sound effect of a knife stabbing through the protagonist's skull in the song The Gift from that album was actually suggested by Frank Zappa: "You'll get a better sound if you do it this way.", he said. According to Reed Zappa also said: "You know, I’m really surprised by how much I like your album." [3]

When Zappa visited Czechoslovakia in 1990 he discovered that his music and that of The Velvet Underground and The Rolling Stones were illegal under the communist government because of their rebellious nature.