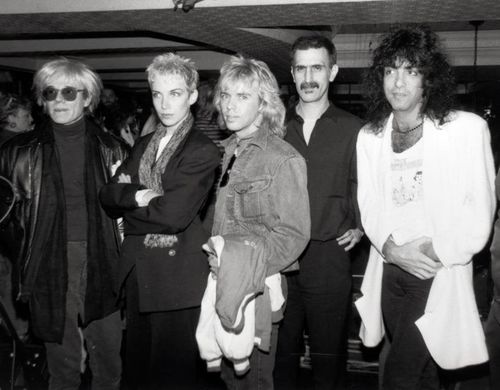 Andy Warhol (August 6, 1928- February 22, 1987) was an American painter, film director, producer and nicknamed "the Pope of Pop Art". He became famous in the 1960s for his paintings featuring people and items from popular culture, including Campbell soup cans and celebrities like Marilyn Monroe, Elvis Presley and Elizabeth Taylor. He also became notorious for his experimental underground movies and was producer, co-manager and cover artist of the rock group The Velvet Underground. 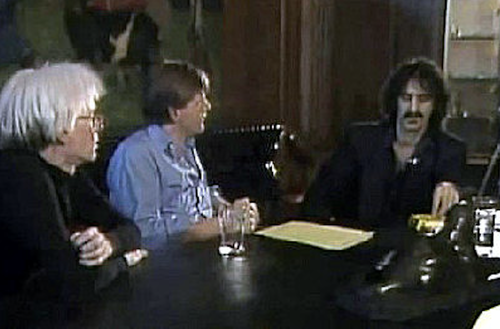 After the release of the first Mothers' album Freak Out! Zappa and the Mothers worked with Warhol at the Trip.

Frank Zappa was a guest in Andy Warhol's cable tv show "Andy Warhol's TV", filmed on June 16, 1983 and broadcast on October 3, 1983. In the presence of Warhol himself and longtime Zappa fan Richard Berlin Zappa was interviewed for 3:46 minutes.

In "Andy Warhol's Diaries" (1989) Warhol recalled the interview with bitterness:

"Thursday June 16 1982: "Frank Zappa came for an interview for our TV show and I believe that after the interview I hated him even more than ever before. He was so childish to us when the Mothers of Invention played with the Velvet Underground - I both think of the L.A. trip as the Fillmore in San Francisco. I hated him then and now I still see nothing in him. He acted very strange about Moon. I told him how great she was, and he said: "Listen, she is my creation. I invented her." Something like: "She's nothing, actually I'm behind it.' I mean, if she were my daughter, then I would say: "People, what a girl", but he left all the honour to himself. Very strange."

During an interview with Bob Marshall Zappa talked about a newspaper article from "New Reality", Minneapolis where he was being badmouthed about Warhol's death and the suicide of actress Divine: "I received something in the mail yesterday that I couldn't believe. In fact, Gerald, if you could go upstairs and ask Gail if she's got that newspaper clipping from Minneapolis, from a paper called New Reality. In this article there's a guy talking about the fact that I knew that Andy Warhol was murdered, and had some knowledge about Divine's suicide, and all this stuff. Did you see that?

Gerald Fialka: We get calls on Pumpkin, one a week. This guy's been doing this in Minneapolis for a while, and they try to connect, and I say, "There is no connection".

Zappa: "It's a porno paper. It's not even a real newspaper. It's got ads for bondage and stuff in it. And here's this guy making references to me knowing something about the supposed murder of Andy Warhol, and something to do with Divine, and a few paragraphs later, mine and my daughter's foot fetish, and all this stuff. It's just the most bizarre stuff. So, I laughed it off. But, you talk about things that appear in print with my name connected to it. I'm not to be held wholly responsible for what's out there." (Cited from: Interview by Bob Marshall)

During Zappa's induction in the Rock 'n Roll Hall of Fame Lou Reed compared Zappa with Andy Warhol: "I respected him and I knew he respected me."