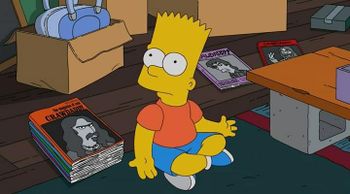 Scene from "A Midsummer's Nice Dream"

"The Simpsons" is a popular and influential American satirical animated TV show (1989- ), featuring the family Simpson and their daily struggles in modern society. The main characters are the not-too bright father Homer, his conventional wife Marge, bratty teenage son Bart, intellectual daughter Lisa and mute baby daughter Maggie. The show features hundreds of secondary characters, some of them more popular with viewers than The Simpsons themselves. "The Simpsons" also hold the record as the TV show with the most celebrity guest appearances in its history.

The show originated as short animated segments during the Tracey Ullman show in 1987-1989. During its early years, in the 1990s, "The Simpsons" were the most succesful prime time animation show since "The Flintstones" (1960-1967). The program also drew controversy due to Bart's rebellious behaviour and the satirical attacks on politics, religion, values, media, advertising and modern American society in general. President George Bush even loathed the program in a speech he gave in 1992 addressing the Republican Party: "America needs to be a lot more like "The Waltons" and a lot less like "The Simpsons". In the next broadcast of the show The Simpsons watched Bush's speech on TV whereupon Bart striked back: "Hey, we're just like The Waltons. We pray for an end to the Depression too."

During the earliest seasons much of the animation was provided by Gabor Csupo. Among the many celebrities who appeared as special guest voices on the show have been Michael Jackson, Johnny Carson, Larry King, Ringo Starr, Paul McCartney, Linda Ronstadt, Tom Waits, Cheech & Chong, Jerry Lewis, Little Richard, Johnny Cash, The Who, Mick Jagger,...

Zappa and The Simpsons

"The Simpsons" was created by Matt Groening, who is a huge Zappa fan. According to the DVD commentary to the episode Bart Dogs Gets An "F" (1991) this was the first episode Zappa caught on TV and he got in contact with Groening soon afterwards. Groening said that Zappa felt the scene where Homer tries to sell Santa's Little Helper over the phone was the funniest moment of that episode.

In a July 1991 issue of Interview (see image) Zappa said that he and his daughter Diva Zappa watched The Simpsons every Thursday night.

Zappa once suggested appearing as a special guest voice on The Simpsons, as he had done for Ren And Stimpy, but became too ill before he could record his part.

References to Zappa in "The Simpsons"

So far, two undeniable references to Frank Zappa have been found in "The Simpsons".