"The Ren & Stimpy Show" was an animated cartoon series (1991-1995) featuring the surrealistic and often disgusting adventures of Ren, an aggressive chihuahua, and Stimpy, a dim witted Manx cat. 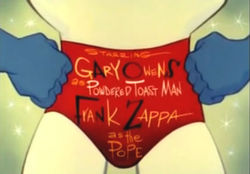 Title card of the episode.

In Episode 8 ""Powdered Toast Man" (first broadcast on 15 August 1992), Frank Zappa provided the voice for "The Pope" also credited as "The man with the funny white hat".

Harry Andronis was sound mixer on the Ren And Stimpy show and he also worked with FZ. He informed the show's director (and Zappa fan), John Kricfalusi, that FZ was a fan of the show and arranged for them to meet. At the subsequent meeting, at the Zappa home, Kricfalusi asked FZ if he wanted to do a voice for the show.

Kricfalusi on the audio commentary on the DVD version of the episode:

"Yeah, Frank Zappa was a fan of the show, and I was a huge Frank Zappa fan growing up. I had all his records. and when I found out he was a fan, our mixer, one of the sound engineers, was also mixing some frank zappa records and he uh handed the phone to me one day and it was Frank on the line. So frank invited me to his house that weekend. --[other voice: "lucky bastard"] and I went with Eleanor Blake and Frank and his family and I, Moon Unit and Dweezil. We all sat around watching Ren & Stimpy cartoons all afternoon he was laughing all through them and after it was over I asked: "Hey Frank, you want to BE in a cartoon?' and he said: "Yeah, that'd be great." and I said: "You want to be the pope?" and he said: "Yeah, I always wanted to be the pope."