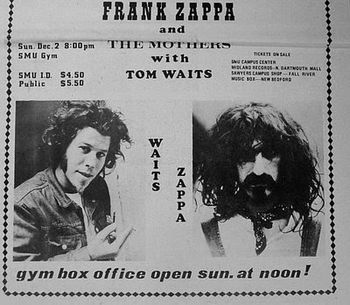 1973 announcement poster for a concert at Southeastern Massachusetts University, Darmouth.

Tom Waits (Pomona, California, July 12, 1949) is an American singer, pianist and occasional actor. Waits' early music (1973-1983) can be described as late night piano music in a bar and is actually quite accessible. His later work, from 1983 on, was more underground style music combining rock and folk music. He has a very recognizable growling voice, similar to Captain Beefheart of whom he is a fan.

As a child he would keep a pad of paper and pencil by his bed so that he could write down the lyrics he thought up in the middle of the night. He taught himself how to play the piano at a neighbor's house, and then learned the guitar. Waits got into the music business at an early age; Herb Cohen signed him to Asylum records in 1971 ('discovered at a "Hoot Night" at The Troubadour).

Tom Waits' Restaurant is mentioned in the lyrics of some Stink-Foot versions.

Tom Waits was mentioned and thanked in the liner notes of The MOFO Project/Object (2006) album. [2]

Is there anyone who comes to mind whom you respect in the music business? Tom Waits, for instance?

"I don't disrespect him, but I wouldn't say he's an idol or anything. I don't usually think about people in the music business.