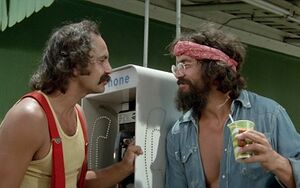 In 1968 Cheech Marin went up to Zappa and auditioned to be a singer. During their meeting he also met Captain Beefheart. Marin sang Zappa a few songs, but didn't get the gig. However, Marin did leave for Canada the next day, so he was never sure whether Zappa called him back, or not? [1] [2]

Cheech Marin named Zappa definitely one of his musical influences. [3]

According to page 116-177 of Tommy Chong's autobiography, "Cheech & Chong: The Unauthorized Autobiography" Zappa once went to a Cheech and Chong Show in Santa Monica near the end of the 1960s, but was offended by their glorification of drugs:

"That night was special because there were people in the audience who were giants in the industry, and they had come to see Cheech and Chong. We performed what was probably our best show that night. No one heckled and no one left offended,... except for Frank Zappa. Frank had a reputation for being really off the wall when it came to Chicano humor. He was not Chicano, but he had adopted Chicano sensibilities and humor spending time with the Chicano members of his band, the Mothers of Invention, from East L.A. However, according to our sources, Frank was not impressed with our act. He was so antidrug that our very first bit about the Chicano lowrider and the hippie was his worst nightmare. Frank was known to fire any of his band members if he found out they did drugs. Ironically, Frank was a chain smoker, drank copious amounts of coffee, and eventually died at an early age." [5]

FZ: "Yeah. On the Mystery Disc, that's gonna be included in the first … ah … seven record box set of those Old Masters, there is a … there's an example of one of my first collages based on material recorded the night that I took over occupancy at Studio Z, my first recording studio. We had a party there with a bunch of … ah … strange people including Captain Beefheart and this guy named Bob Narciso, who is doing Pachuco comedy about ten years before Cheech & Chong, and I chopped all this conversation up and there's a part about three minutes segment of that in there."
CA: "And that was from '62 or something?"
FZ: "Yeah, it's about '62."[6]

When Den Simms and Eric Buxton interviewed Zappa about the Secret Words he used during concerts Cheech & Chong were mentioned again:

Den Simms: "Right. Alright I got one last one ... which is from Graz which is "hairpiece.""

Frank Zappa: "Oh, did you ever see that Cheech & Chong movie where they play these two Arab brothers?"

Frank Zappa: "No, not the Corsican Brothers. They play these two Arab guys."

Frank Zappa: "Yeah. That's what it was, that's right."