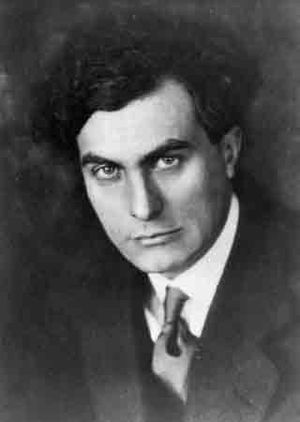 He was Zappa's main musical influence and the artist who inspired him to become a composer.

Varèse was born a few days after Anton Webern and was the son of an authoritarian father, who left him to be raised by his grandparents in pursuance of an engineering career. Like Zappa, Varèse had a peripatetic youth, uprooting and residing in Villars, Paris, Berlin and Turin.

Ouellette's biography of Varèse establishes the spelling of his first name;

"Although the Christian name Edgar is spelt without a second 'd' in French, a 'd' appears in the official certificate confirming the birth of Varèse. So, except during a brief period of his life, Varèse always signed his name with a second 'd'."

Growing up in a world where he rarely heard music he was fascinated by sound – the whistle of a train, the sounds of the wind, the ebb and flow of rivers and the rhythms of an industrial city. By 1904 he was a student at the Schola Cantorum, and later at the Paris Conservatoire.

In November 1907 Varèse married the actress Suzanne Bing, whom he had met at the Conservatoire, and they moved to Berlin. They had a daughter, but were divorced by 1913 in pursuance of their own careers. She moved to America with her theatre company, spending a period in New York where the company had a two year residency at a Garrick Theatre. [not the Garrick Theater]. In 1915 Varèse also moved to America, having had most of his early works destroyed by a fire in Berlin.

Varèse worked at promoting his vision of a new electronic music while employed as a copyist, teacher and conductor. He founded the short-lived New World Orchestra and composed Amériques, which he finished in 1921, but it would not be performed for another five years. During the summer of 1921 Varèse and Carlos Salzedo set up the International Composers' Guild (ICG), to promote the performance of contemporary music. Their manifesto stated;

"Dying is the privilege of the weary. The present day composers refuse to die. They have realized the necessity of banding together and fighting for the right of each individual to secure a fair and free presentation of his work".

During the next six years the ICG presented works by fifty six composers, including Schoenberg, Stravinsky, Webern, Berg, Hindemith and Honegger. During this period Varèse composed Offrandes, Hyperprism, Octandre, and Intégrales.

In November 1927 Varèse dissolved the ICG and, in 1928, established the Pan American Association of Composers with Nicolas Slonimsky as it's principal conductor. Varèse returned to Paris in 1928, where he set about modifying the score of Amériques to include the Ondes Martenot and, around 1930, composed Ionisation for percussion instruments. It was first performed on March 6, 1933 at Carnegie Hall, with Nicolas Slonimsky conducting.

At this time some American moralists were expressing concerns about the corruption of young American students studying in Paris. Over 50 years before Zappa's exchanges with the PMRC regarding morality and music, Varèse responded to these earlier American moralists' concerns in a interview;

"I feel suspicious of anyone who sets himself up as a judge of other people's morals, building himself a wall of such lofty morality that one has to wonder what he is hiding behind it".

By 1933 Varèse was back in New York, having finished Ecuatorial which was first performed in 1934, again under Nicolas Slonimsky. (to be continued ...)

In my compositions, I employ a system of weights, balances, measured tensions and releases – in some ways similar to Varèse's aesthetic. The similarities are best illustrated by comparison to a Calder mobile: a multicolored whatchamacallit, dangling in space, that has big blobs of metal connected to pieces of wire, balanced ingeniously against little metal dingleberries on the other end. Varèse knew Calder, and was fascinated by these creations.

During "Star Special" (BBC Radio 1 in 1980). played Hyperprism and commented;

"Varèse was a really cool guy. The only thing that he did that was wrong was he stopped composing for 25 years because people gave him a bad time. If people wouldn't have given him a bad time, he could have been writing for 25 more years and there would be 25 more years worth of stuff like that for the people who like that kind of stuff. But most people don't".

Throughout his life Zappa honored the work of Varèse. In "Son of Suzy Creamcheese", an article by Robert Shelton, The New York Times, 1966, Zappa said of Amériques; "It blows my mind. It’s my favorite top-40 record". FZ's 1989 playlist of ten records for the American radio show Castaway's Choice, hosted by John McNally, included Varèse's Octandre. He also played "Octandre" during the Musik Für Junge Leute show.

. In Faves, Raves And Composers In Their Graves Zappa named "The Complete Works Of Edgard Varèse, Volume 1" as one of his favorite records.

In 1971 Zappa wrote "Edgard Varèse: The Idol of My Youth", an insight into his discovery of, and enthusiasm for, the music of Varèse. FZ was also interviewed for the Varèse appreciation radio documentary Varèse:Sonic Liberation [MP3 stream (58 minutes)]

Edgard Varèse is name-checked on the cover of Zappa's album "Freak Out!" (1966) under the heading "These People Have Contributed Materially In Many Ways To Make Our Music What It Is. Please Do Not Hold It Against Them". He is also mentioned in "The Real Frank Zappa Book" (1989).

Varèse's music "really kind of set us free in terms of what was possible musically". And so, what I was trying to say in 'A Hit by Varèse' was, "Wouldn't it be great if music this free could actually be accepted on radio — not just by the programmers, but by the people listening?'"

Edgard Varèse said of his work;

"I long for instruments obedient to my thought and whim, with their contribution of a whole new world of unsuspected sounds, which will lend themselves to the exigencies of my inner rhythm."