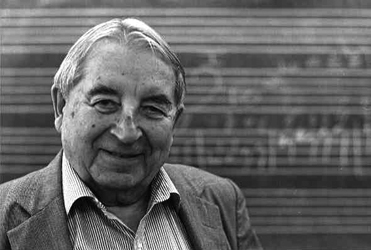 Slonimsky was born in St. Petersburg, but settled in the US in 1923. There he conducted, wrote music articles for newspapers and magazines, lectured at Harvard (not in music, but Slavonic languages), composed orchestral works and commercial jingles, and compiled "big books" of reference that have proven essential to the study of music: i.e. "Baker's Biographical Dictionary of Musicians" – editions 5–8, "Music Since 1900" – fifth edition, "Thesaurus of Scales and Melodic Patterns" and "Lexicon of Musical Invective".

As a conductor, he introduced Edgard Varèse's Ionisation at the Hollywood Bowl in 1933, in addition to conducting premiere works by Charles Ives, Henry Cowell, and other noted contemporary composers. Varèse even dedicated the score of Ionisation to Slonimsky and was best man at his wedding.

Slonimsky had a eidetic memory and could recall smallest details of something he’d read forty years before.

His autobiography, "Perfect Pitch", was published in 1988. Slonimsky died on Christmas Day 1995, at the age of 101. Slonimsky's daughter, Electra Yourke, revised and expanded "Perfect Pitch" in 2002.

In 1981, Frank Zappa called Slonimsky on the telephone, having found his number listed, and a meeting was arranged. Zappa had read Slonimsky's book "Thesaurus of Scales and Melodic Patterns" and called it ("the Bible of improvisation"). Slonimsky recalled: "This guy called me up ... and asked if I was Nicolas Slonimsky - correctly pronouncing my name! And I arranged to meet with him ... Zappa showed me some of his scores ... they looked like they could've been written by Varèse posthumously ... fabulous contra panto dissonances ..." Zappa asked Slonimsky if he'd like to "sit-in" with The Mothers at their next concert, in Santa Monica, on 12/11/1981; Slonimsky accepted. He performed one of his own compositions that night. He visited the Zappa home a number of times after that, and was particularly 'taken' by Moon, naming his new cat "Grody to the Max" in tribute to her.

"He's just a brilliant mind. And a very warm-hearted spirit. And these are qualities not often found linked together in human beings. And ... I just liked him. One of the things I really liked about him was his wardrobe. I always was impressed with his wardrobe from the first time he came over, because he had that look. He had the look of a real guy from that era, you know what I mean? The right kind of shoes, the right kind of tweed, rumple, worn for a thousand years. Kinda ... sport coat, pants too short. He was wonderful. He was a fully developed character."

FZ about Slonimsky in one of his last interviews

Slonimsky was also one of the many celebrities who wrote a homage to Zappa in "Guitar Player Presents" ' special about Frank Zappa. He said: "There will be a new millennium eight years from now. I admire everything Frank does, because he practically created the new musical millennium. He does beautiful, beautiful work, he has beautiful ideas. It has been my luck to have lived to see the emergence of this totally new type of music which a hundred years ago didn't exist, a music created out of the recombination of dissonances between two tones, which are intervls, and a variety of separate tonalities which are combined in various ways - that's the best defintion I can give. It doens't contain quartertones or small intervals. Zappa sticks to 12 different intervals. What he does with them in terms of organization is what is so far, far from traditional approachs. That's the secret of his greatness. But, of course, he is very careful. He doesn't just throw things together without any order or without a plan of what to do next. He's a remarkable man. He's somebody who is completely new and completely different. Zappa sticks to the classical type of music. He is a classicist and a constructionist. And yet, why should he have to know formal harmony or counterpoint? Webern never finished a counterpoint book. Zappa would stand on good footing with Schoenberg, because Schoenberg never departed from his scale of 12 tones and 11 different intervals, whereas Webern and Stockhausen completely discarded such things and made the world of music just sound completely different and practically as unrecognizable as Chinese music. But Zappa puts musical sounds together and creates something new but not destructive of scales or intervals. He is a remarkable man, and I think that he will make a decided triumph towards new harmony and new counterpoint and new intervallic construction and everything that is new, while still keeping the old components of notes, intervals, and harmonies. He can do anything now, and with his technology there is no limit to what he can achieve."

Slonimsky is one of the people receiving thanks for their "very special but no less significant contributions" in The Yellow Shark liner notes. [1] He is also interviewed in the documentary Ein Leben Als Extravaganza - Das Genie Frank Zappa.

In Don Menn and Matt Groening's interview The Mother Of All Interviews (Part 2) Menn asks Zappa what he thinks of a certain quote by Slonimsky about him.

Menn: "Nicolas Slonimsky describes you as the pioneer of the future millennium of music. Do you have a concept of what he means?'

Zappa: "No, but he's very kind to make up something like that. When you start using words like millennium, that's pushing the boundaries of good taste."

Menn: "He explained that the technology you have mastered opens up compositional possibilities, possibilities never available to any composer before."

Zappa: "Well, the sad thing is that the technologies that I've developed are probably not going to be available to any composer afterwards either, because the technologies are all so expensive. Unless something happens to bring down the cost of the tools that I'm using then most of the other people who are writing music will never be able to deal with it."

The title of Frank Scheffer's documentary Frank Zappa: Pioneer Of Future Music, parts 1 & 2 was based on Slonimsky's quote about Zappa.