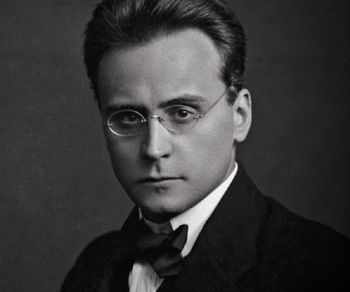 Anton Webern (born: Anton Friedrich Ernst von Webern) (3 December 1883 – 15 September 1945) was an Austrian composer and conductor. He was a member of the Second Viennese School. As a student and significant follower of Arnold Schoenberg, he became one of the best-known exponents of the twelve-tone technique, in addition, his innovations regarding schematic organization of pitch, rhythm and dynamics were formative in the musical technique later known as serialism.

According to Frank's account in The Real Frank Zappa Book Zappa was thrown out of Karl Kohn's music class after a disagreement about Anton Webern.[1] However, Kohn had a different recollection and claimed that Zappa told him he would move away and therefore be unable to complete the semester.[2]

Frank Zappa mentions Anton Webern in the list of influences inside the sleeve of his debut album "Freak Out!" (1966), under the heading "These People Have Contributed Materially In Many Ways To Make Our Music What It Is. Please Do Not Hold It Against Them".

Zappa listed the complete works of Webern in My Favorite Records, a 1967 article for Hit Parader: "You ought to look into the complete works of Anton Webern on Columbia (K4L-232), conducted by Robert Craft. That's four records. Robert Craft is not always an excellent conductor, and his performances are not always absolutely accurate, but they probably didn't give him a very good budget because it was modern music, and they wanted to get the job over with, and he was probably under pressure, so don't mind the mistakes that are on there if you're following it with a score."

On 16 September 1974 Zappa was guest DJ on Musik Für Junge Leute and played Webern's "Five Pieces For Orchestra". In 1989 he selected Webern's "Bagatelles" for String Quartet and "Symphony, Opus 21" for the American radio show Castaway's Choice, hosted by John McNally.

Quotes by Zappa about Webern

"Probably the most influential composer in terms of how many people imitated his style, in recent years, that award would go to Webern first, for being the founder of the "boop-beep" school and also to Penderecki because of the "texture" music that a lot of people imitate. But I think that even his music grows out of some of the textural experiments that Varèse did. - Frank Zappa, quoted in: Frank Zappa on Edgar Varèse, John Diliberto and Kimberly Haas for DownBeat, 21 November 1981.

"The other composer who filled me with awe -- I couldn't believe that anybody would write music like that -- was Anton Webern. I heard an early recording on the Dial label with a cover by an artist named David Stone Martin -- it had one or two of Webern's string quartets, and his Symphony op. 21 on the other side. I loved that record, but it was about as different from Stravinsky and Varèse as you could get.". Frank Zappa, quoted in: The Real Frank Zappa Book.