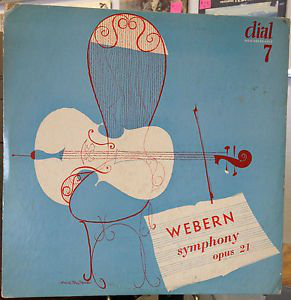 In 1950 a version of this composition was recorded by conductor René Leibowitz and the Pro Arte Quartet and the Paris Chamber Orchestra under the title Symphony, Opus 21. The album, distributed on the Dial label, featured Webern's Symphony, Opus 21, his Five Movements For String Quartet and Six Bagatelles For String Quartet, while the artwork was designed by David Stone Martin.

"The other composer who filled me with awe -- I couldn't believe that anybody would write music like that -- was Anton Webern. I heard an early recording on the Dial label with a cover by an artist named David Stone Martin -- it had one or two of Webern's string quartets, and his Symphony op. 21 on the other side. I loved that record, but it was about as different from Stravinsky and Varèse as you could get. I didn't know anything about twelve-tone music then, but I liked the way it sounded." - Frank Zappa in The Real Frank Zappa Book.

In 1989, during the radio show Castaway's Choice hosted by John McNally, Zappa named Symphony, Opus 21 and Bagatelles for String Quartet some of 10 records he would take to a deserted island with him.