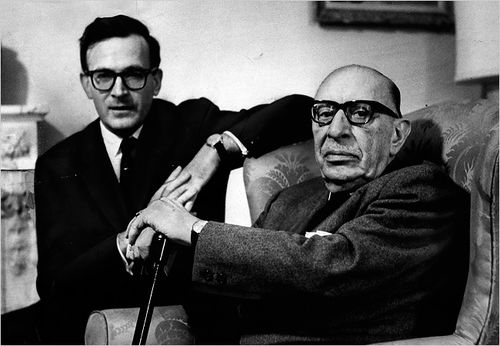 Robert Craft (20 October 1923 - 10 November 2015) was an American conductor and musicologist. He is best known for his (professional) friendship with Igor Stravinsky between 1947 and 1971.

In 1947, while still a student at Juilliard, he wrote Stravinsky asking to borrow the score and instrumental parts for his "Symphonies of Wind Instruments" in order to perform the piece the following spring at a concert in Town Hall. Stravinsky received the letter on the same day he began to prepare a new version of the work, and, as he later said, felt something auspicious in the coincidence. However that may be, he answered that he would like to conduct the premier of the work in its new form in Craft's concert. An astonished Craft replied that this would be a great honor but that he was unable to pay the composer's fee. Therewith, in an unprecedented gesture, Stravinsky agreed to waive his cachet. In April 1948 he shared a program with Craft, the first of many during the next twenty years.

For the rest of Stravinsky's life, Craft would compile libretti and conduct Stravinsky's pieces. He performed the world premiers of Stravinsky's later works "Von Himmel hoch", Agon", "The Flood", "Abraham and Isaac", "Variations" (Chicago Symphony), "Introitus", and "Requiem Canticles". Craft additionally recorded a ten volume discography of the music of Igor Stravinsky on the Music Masters Label. He also helped the maestro on several books about musical and non-musical subjects.

Zappa named Robert Craft in his list of influences in the sleeve of his debut album Freak Out! (1966), under the heading: "These People Have Contributed Materially In Many Ways To Make Our Music What It Is. Please Do Not Hold It Against Them".

Zappa also owned a version of Pierre Boulez's Le Marteau Sans Maître, conducted by Boulez himself, with Karlheinz Stockhausen's Zeitmasse on the other side, conducted by Robert Craft.

Quotes by Zappa about Robert Craft

"You ought to look into the complete works of Anton Webern on Columbia (K4L-232), conducted by Robert Craft. That's four records. Robert Craft is not always an excellent conductor, and his performances are not always absolutely accurate, but they probably didn't give him a very good budget because it was modern music, and they wanted to get the job over with, and he was probably under pressure, so don't mind the mistakes that are on there if you're following it with a score." And: "Also, Pierre Boulez conducts his own composition: 'Le Marteau Sans Maître'. I don't know what label that's on, but it's the one with Boulez conducting. The one by Robert Craft has too many mistakes."