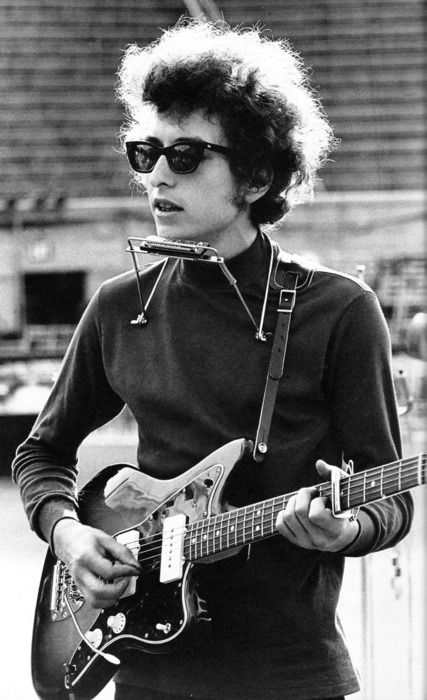 A mysterious and difficult to categorize figure, Dylan has reached a legendary status in the music world. He has often received awards, including the 2016 Nobel Prize for Literature as the first musician to win this prize.

Earlier in his career Dylan had a relationship with fellow folk musician Joan Baez. Dylan is also depicted on the cover of The Beatles' Sergeant Pepper's Lonely Hearts Club Band album.

Zappa mentioned Bob Dylan in his list of influences inside the sleeve of "Freak Out!" (1966), under the heading: "These People Have Contributed Materially In Many Ways To Make Our Music What It Is. Please Do Not Hold It Against Them".

"Dylan's 'Subterranean Homesick Blues' was a monster record. I heard that thing and I was jumping all over the car. And then when I heard the one after that, 'Like a Rolling Stone', I wanted to quit the music business, because I felt: 'If this wins and it does what it's supposed to do, I don't need to do anything else', but it didn't do anything. It sold; but nobody responded to it the way that they should have. (...) It didn't happen right away, and I was a little disappointed. I figured, 'Well, shit, maybe it needs a little reinforcing." - Frank Kofsky interviews FZ, 1968)

"As for Dylan, 'Highway 61 Revisited' was really good. Then we got 'Blonde on Blonde' and it started to sound like cowboy music, and you know what I think of cowboy music." - Playboy-interview (1993)

Bob Dylan visited Zappa on December 22, 1982, showing up at FZ's door, in the freezing cold, to play some songs on the piano; he asks FZ if he would produce an album (what turned out to be "Infidels") for him. Dylan did not get in touch with FZ after that; "Infidels" was produced by Bob Dylan & Mark Knopfler and released in 1983.

Flakes, a song on FZ's Sheik Yerbouti album, contains a Dylan parody, with guitarist Adrian Belew doing the Dylan "voice". FZ asks in the background, "Wanna buy some Mandies, Bob?". Mandies is slang for no longer manufactured British Methaqualone based tablets Mandrax which were similar to Quaaludes.