Ruben And The Jets 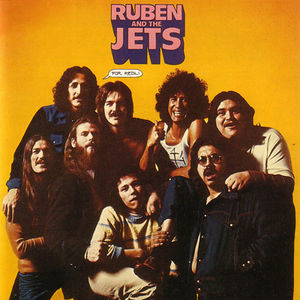 Thanks to Mark Guerrero for permission to quote the following extracts from his interview with Rubén Guevara.

Rubén Funkahuátl Guevara (Born: Ruben Ladron de Guevara) is a singer, songwriter, producer, writer, poet, performance artist, and impresario.  He made his mark in music with his 1970s band Ruben & the Jets, who recorded two albums on the Mercury Record label, the first produced by the legendary Frank Zappa.

In 1958, Rubén and Pablo Amarillas formed the Apollo Brothers, who were influenced by Don & Dewey and the Carlos Brothers.  They performed at the El Monte Legion Stadium, Alan Freed’s Record Hop at Jordan High in Watts, Pacific Ocean Park, and various local television shows. At the time Rubén’s influences were: In doo wop (besides the two previously mentioned); Robert & Johnny, Vernon Green & the Medallions, The Penguins, The Jaguars (South Central L.A.), The Flamingos, Don & Juan, Ritchie Valens, and Lil’ Julian Herrera.

In the late 60s, Rubén went to Los Angeles City College and studied music composition and modern composers for two years.  This education was of help when he worked with Lalo Schiffrin on the soundtrack for Clint Eastwood’s “Coogan’s Bluff,” in 1968, and his later work with Frank Zappa.

In 1969, Rubén went to a Frank Zappa and the Mothers of Invention concert at the Shrine Auditorium.  Zappa had just put out a parody doo wop record called Cruising With Ruben & The Jets.  Rubén got backstage and thanked Zappa for bringing back that kind of music and told him that his name happened to be Rubén and that he sang in that style.  Two years later, Rubén went to Zappa’s house with a friend, keyboardist Bob Harris, who had toured with Frank.  After spending hours listening to records and talking about music, Zappa and Rubén found that they liked much of the same music, rhythm & blues and doo wop, as well as modern composers such as, Varese, Bartok, Stravinsky, and Cage.  Zappa asked Rubén if he’d be interested in forming a real Ruben & the Jets.  Rubén put the band together and auditioned for Zappa, who wound up producing their debut album.

Ruben & the Jets did a west coast tour with Frank Zappa in late 1972. When Zappa was a guest on Dr. Demento in December 1973 he played four songs by the group, namely "Bang Bang Lulu", "Earth To Buffalo", "I Wanna Know" and "Low Ridin' Cruiser".