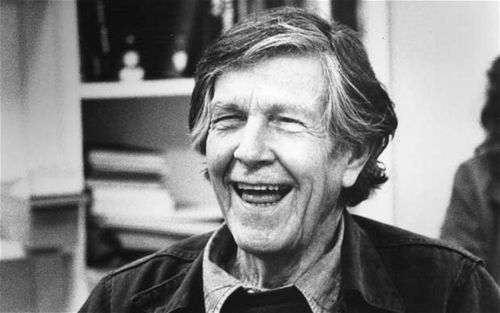 Zappa cited Cage among his favorite artists in Data For Sensitive or Critical-sensitive Position (1968).

Zappa paid homage to Cage on the tribute album A Chance Operation - The John Cage Tribute (1993).

Cage was also mentioned and thanked in the liner notes of The MOFO Project/Object (2006) album. [1]

"Stockhausen isn't really an influence. That is, I have some of his records but I don't play them much. Cage is a big influence. We've done a thing with voices, with talking, that is very like one of his pieces, except that of course in our piece the guys are talking about working in an airplane factory, or their cars." - Frank Zappa, quoted from a 1968 interview by Sally Kempton in Village Voice, Zappa and the Mothers: Ugly Can Be Beautiful.

In a 15 April 1991 radio interview with Charles Amirkhanian, Ode To Gravity - Frank Zappa: World Affairs Commentator, Zappa discussed the possibility of running for U.S. President and having John Cage and Noam Chomsky as cabinet members: "The only thing I'm worried about is that since John Cage is macro-biotic, he won't be available for the Cabinet now."

"The next thing that we're going to try is that I have an offer from the Frankfurt Festival in Germany for 1992, which, in part, is a celebration of John Cage's 80th birthday. Cage is going to be there; Stockhausen is going to be there; and they want me to be there with some of my music. One of the things I proposed to them is that they put the guys in this chamber ensemble called Ensemble Modern on a plane to L.A. for two weeks. I will train them, as I would my band, and build the piece for them." - Frank Zappa, quoted from Frank Zappa Makes A Jazz Noise, Interview in Down Beat, conducted by Michael Davis, July 1991.

"Any time you're dealing with the improvisational medium, you have to bow your head to John Cage, because he has to be the master of taking nothing and making something out of it. If you are going to improvise, you're always working in his territory. Which is not to say that the improvisations that we'll be doing will sound like John Cage compositions, but there is always that special element of chance that he's always dealt with." - Quoted from Frankfurt Press Conference 21.7.92, interview in T'Mershi Duween, issue #26, September 1992, by Axel Wünsch and Aad Hoogesteger.

"Without Cage much of what takes place in modern music and art "would not be possible." Quoted from Frank Zappa, 1992-10-01, interview in the Los Angeles Times, 1 October 1992.

Don Menn: What about some of the experimenters, like John Cage doing silence [a piece called 4'33" in which the performer makes no intentional sounds]?

Zappa: "I think that's an acquired taste. When I first learned of Cage's work, it seemed like the concept of it was far more entertaining than the audio result, but that could have just been a matter of the performances that were available on record at that time. Because even if you're going to be performing – well, silence is a bad example, but somebody with more abstract notations that require a conscious participation of willingness on the part of musicians to do something constructive in the piece. It's not often that you find musicians who like that idea and who will do a good job with it. I'm pretty sure that early recordings of Cage did not have willing accomplices." - Quoted from The Mother Of All Interviews (Part 2), 1992.