Little Julian Herrera and the Tigers 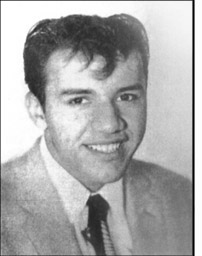 Late 1950's Chicano style Doo Wop group signed by Johnny Otis to his Dig label in 1956 after discovering them at the El Monte Legion Stadium. They recorded a couple of singles for Dig which became local hits. In 1957 they moved to Starla Records and recorded "I Remember Linda" featuring Ray Collins' falsetto backing vocal.

Herrera seemed to vanish not long after. Otis later recalled a probation officer coming to him looking for a Ron Gregory. When shown a picture Otis said "That's Lil' Julian". It is thought that Ron Gregory was a Hungarian Jew who, at the age of eleven, had run away from his home in Massachusetts and hitchhiked to Los Angeles where he was taken in by an Mexican American family and later adopted their family name.

From the "biographical trivia" section on the Freak Out! (1966) album:

Ray used to be a carpenter and a bartender and sing with Little Julian Herrera & The Tigers (note the falsetto part in 'I REMEMBER LINDA')... been singing R&B for ten to twelve years.