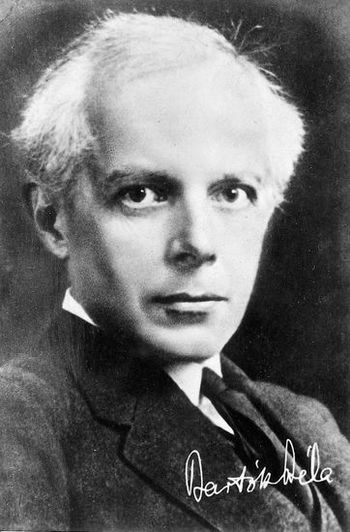 Bartók travelled throughout Eastern Europe and parts of Asia and Northern Africa to collect traditional folk music on wax cylinder recordings. Though he wasn't the first composer to be inspired by traditional peasant music, nobody but Bartók absorbed the raw, primitive power of these melodies and rhythms so brutally in his own compositions. At the start of the Second World War Bartok fled to the United States, where he died in 1945.

One of Zappa's favorite musical pieces were Bartók's three Piano Concertos. He named them all as three of his favorite musical albums in the My Favorite Records article in Hit Parader (1967) and selected the Third Piano Concerto (1945) , on Castaway's Choice. Later Zappa would quote the track on Make A Jazz Noise Here and in an interview he would claim: "I think it is one of the most beautiful melodies ever written". Nigey Lennon also mentions on page 103 of her book "Being Frank - My Time With Frank Zappa" that Zappa enjoyed listening to Bartók's Third Piano Concerto: "The first time I heard the main melody in the first movement of this thing, I almost (now don't laugh) cried," he said with a fierce shyness when he put on the record, just daring me to snicker."

"Bartók used to collect folk songs and use them in his compositions. In my case I collect folk lore of a verbal kind, from the street or from the people immediately surrounding the world of the group, and convert them into a musical reference." - Frank Zappa in Zappa – The Great Satirist, Interview by Bob Dawbarn.