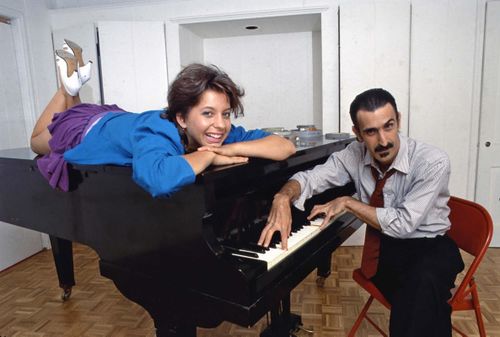 Moon Unit and Frank Zappa, photographed in the mid-1980s.

Moon Unit Zappa (New York, September 28, 1967) is Frank and Gail Zappa's oldest child and daughter. She is the sister of Dweezil Zappa, Ahmet Zappa and Diva Zappa. She is active as a singer, actress, writer and director.

Zappa cut all ties with Wild Man Fischer once he threw a bottle at Moon Unit, even though he missed.

She and Dweezil can be seen as young children in the Dutch documentary Frank Zappa by Roelof Kiers. .

"UNIT" is one of the stars in the "One Size Fits All" (1975) "universe". As a 14-year old Moon contributed vocals to "Valley Girl" (she was credited for her improvised monologue) from "Ship Arriving Too Late To Save A Drowning Witch". The single unexpectedly became the biggest hit of Zappa's career and Moon famous for a while.

Moon was also a guest vocalist on the albums "You Are What You Is”, "Them Or Us" (on the track "Ya Hozna") and on "Frank Zappa Meets The Mothers Of Prevention". She can be heard on seven tracks of "Civilization Phaze III". She is also referenced in A Few Moments With Brother A. West: "I ask you, Mr. Frank Zappa, what kind of man can name a child Moon Unit?"

In 1994 she posthumously inducted Frank Zappa into the Rock 'n' Roll Hall of Fame, in the presence of Lou Reed.

Moon also appeared in Dweezil's video "My Guitar Wants To Kill Your Mama" and sang on his albums Havin' A Bad Day (1986) and Confessions (1991). Moon, Kyle Richard and Lala Sloatman appeared in a failed pilot for a show ("Bunny Bunny Bunny") that FZ described in "Video From Hell" as "an Ionesco sort of post-punk sitcom". Moon created paintings for the Gabor Csupo/Bret Crain gallery inside the Lumpy Gravy restaurant in L.A.

On 6 November 2010 she appeared as a guest artist during the Zappa Plays Zappa concert in London, where she performed Valley Girl live, a song Zappa never performed live in concert.

In April 1998 she published the article Confessions of a Metalhead in Harpers Bazaar. In 2001 she published her first book, America the Beautiful (2001), which is said to be "17% autobiographic"... She also contributed the chapter Having a Baby can Waylay Getting You Way Laid in the book Blindsided by a Diaper (Three Rivers Press, 2007).

Interviewer: How has Moon's popularity affected homelife around here?

Frank Zappa: "The popularity was in direct proportion to the life cycle of that particular hit single. There was a mysterious fever that surrounded "Valley Girl" that had nothing to do with reality. It complicated matters around here because I have my own schedule for interviews and all the rest of the bullshit that goes with the business and then suddenly she had the same thing, too. I don't drive, she didn't drive at the time, and my wife drives in a carpool. She's a minor and had to be escorted everywhere. It made things real complicated – and last year she had a part in "National Lampoon's European Vacation", a film shot in Rome. It started out to be an eight-day shoot, but Gail ended up sitting around with her for about a month. It just makes things a mess, but Moon will be of age pretty soon and she'll be able to go out and do stuff on her own." - Frank Zappa in Lynching With Bonzai: Frank Zappa, Interview with Mr. Bonzai, September 1985.