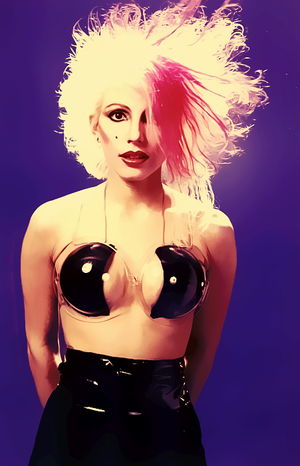 Dale Bozzio (born Dale Frances Consalvi, Boston, Massachussets, 2 March, 1955) is an American pop singer. She was lead singer of the band Missing Persons. She and Terry Bozzio were married from 1979 until 1986.

The daughter of a Boston carpenter and a furrier, she intended to pursue an acting career and gained an entry into the drama program at Emerson College. However, as she was about to join the program, she discovered she'd beaten 200 other aspiring Playmates for a job at Boston's Playboy Club and opted to be a 'Bunny' for four years, under the name Toni Consalvi . She was named Boston's 'Bunny of the Year' in 1976. "A very social time in my life," she recalled in an interview with Deirdre Donahue for People. She then headed out to Los Angeles to resume the pursuit of her acting dream and met Terry Bozzio in a Hollywood recording studio. Consalvi became Dale Bozzio when they married in 1979.

In 1980 Terry and Dale Bozzio formed the group Missing Persons (originally called US Drag) with former Zappa musicians Warren Cuccurullo on guitar and Patrick O'Hearn on bass. Thing-Fish session man Chuck Wild, a classically trained musician, played keyboards. Their first recording was made at FZ's UMRK studio and became a local No 1 on Bingenheimer's airplays for KROQ radio station. Their album, Spring Session M (an anagram of "Missing Persons"), went gold. The two Bozzios and Cuccurullo appeared in a Playboy Playmate VHS The Lunch Wagon (1981 & film 1982), soundtracked by Missing Persons.

The group disbanded in 1986, and the Bozzios divorced. She had a 1988 disco hit with Simon Simon and has subsequently appeared on shows and toured with her own band which, for contractual reasons, is called Missing Persons, featuring Dale Bozzio.

She is mentioned during Titties 'n Beer on Zappa In New York (1977), when Zappa makes Terry Bozzio crack up in laughter during his performance as The Devil: "Hey Dale, would you like to come up here and hold my pickle to satisfy this weird man out here on the stage?".

In 1979 Dale played Mary, the girl from the bus on Zappa's album Joe's Garage Act I and Joe's Garage Acts II & III, during the tracks Catholic Girls (where she sings the line Warren Cuccurullo [1]), Crew Slut, Fembot in A Wet T-Shirt Nite and Packard Goose. During the latter song she delivers Zappa's memorable "Information is not knowledge (...) music is the best." speech.

In November 1991 Dale Bozzio performed at Zappa's 50th birthday tribute at the New York Ritz, modifying the lyrics of Packard Goose to: "Music...and Frank Zappa ... are the best." She is included on the live album & film of the event, Zappa's Universe.

Dale provides background vocals on I Don't Wanna Get Drafted on The Lost Episodes (1995). [2]

Interviewer: What do you think of Bozzio's new band, Missing Persons?

"When I was 16, Frank was playing in Boston (...) the Music Hall . . . that's the one where they had spotlights out front. The Mothers of Invention and his movie was out. I was crazy over Frank. I got totally into his music. I ran to this place and my friend was the usher there—I went to high school with him. I showed up with two of my friends. He said, "You won't believe it. It's sold out!" He said, "Go around the side of the building. It's a fire escape on the side. Climb to the window and go in and jump on a toilet seat and go around the corner and you'll be right near the stage." I turned around and said, "Sissy. Debby. Let's go!" We went up and we did it. I landed on the toilet, opened the door, and Frank Zappa was standing right there. The string is so deep with Frank. If I knew then what I know now . . . I said, "Frank, I'm you're biggest fan." He turned around to his bodyguard and said "Give that girl a backstage pass." I said, "Frank, two more girls are coming." He said, "Smothers, give those girls backstage passes." The he said, "When we're done, we're going out to eat. Do you have a car?" I said, "Yeah, but I can only keep it to midnight because I only had a learner's permit." I drove him home. I had a Delta 88 Canary convertible. I drove him to the Holiday Inn in Cambridge. I said, "Frank, I love you so much but I can't go up there because I'm a good girl. I have to go home by midnight." He never forgot. He took me by the shoulders and kissed me on the forehead. He was a man of not a lot of words." [4]