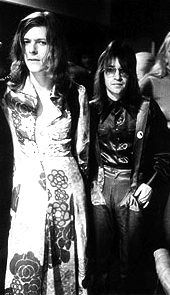 Bingenheimer, the son of a divorced waitress, was raised a latchkey kid and spent time alone listening to rock hits on a transistor radio and reading the Hollywood fan magazines that his mother kept around the house. As young as 13 he would foray downstate to try and commune with those whose lives he read about. "I'd get busted and my mom would have to come and get me," he says.

As a devotee of the music scene Bingenheimer finally arrived on Sunset Strip during the height of the swingin' 1960s. He began as a gopher for Sonny & Cher, who took him under their wing, and was cast as a double for Davy Jones in episodes of The Monkees TV series.

Bingenheimer provided vocal content on Zappa's Side Project albums An Evening With Wild Man Fischer and the GTO collective's Permanent Damage, and often portrayed himself in films, such as Uncle Meat, "Back To The Beach" and "End Of The Century". He also appeared in Mondo Hollywood (1967). In 1984 he played a club owner in "Repo Man".

In the early 1970s he opened Rodney Bingenheimer's English Disco, a nightclub located on Sunset Strip that became a famed watering hole for musicians as diverse as The Turtles, Keith Moon, Blondie, David Bowie and Led Zeppelin and a magnet for their groupies. Elvis Presley even paid it a visit and sampled its English beer. The venue helped introduce UK glam-rock and embryonic punk to the LA scene. Bowie says of Bingenheimer;

"...Rodney singlehandedly cut a path through the treacle of the Sixties, allowing all us 'avants' to parade our sounds of tomorrow dressed in our clothes of derision."

The club closed in 1976 but, thanks to his wide range of Hollywood connections, Bingenheimer began a show - called Rodney on the ROQ - on the Pasadena FM/AM radio station KROQ (pronounced "K-Rock"), which was formerly KPPC, on which FZ had aired his musical choices in '68.

Bingenheimer helped the station to grow in popularity, playing 'alternative' music and helping to break many new bands and records. Subsequently, Zappa's single Valley Girl made its debut on KROQ-FM to much consternation, and portions of Läther (Bootleg Version) [see release notes] were assembled from the station's airplays.

Three Rodney on the ROQ compilation albums were released of Bingenheimer's airplays on KROQ and selected tracks released as The Best Of Rodney On The ROQ. In appreciation for his promotion of their band, the members of Blondie served as Bingenheimer's backing band in a limited release single of Little G.T.O. and are credited as Rodney and The Brunettes.

His lifestyle has been documented in the 2003 film Mayor of the Sunset Strip which features a number of Zappa's 'Supporting Cast', and the Hollywood Chamber of Commerce has acknowledged his grassroots support and contribution to music and radio with a star on the Hollywood Walk of Fame, presented in 2007.