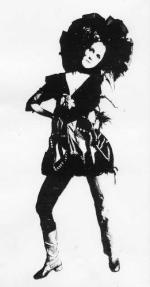 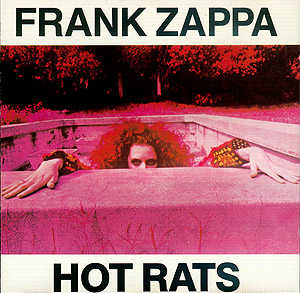 As a teenager, Frka and her friend Sandra Leano moved from San Pedro to L.A. They lived at The Log Cabin, when Carl Franzoni was in residence with his commune. There she became aquainted with the local freak scene and Franzoni and Vito Paulekas' "Laurel Canyon Dance Company". When Zappa moved from New York in 1968 he rented the Log Cabin and Frka became a babysitter in Zappa's household.

Frka can be seen on the cover of "Hot Rats" and she was a member of Zappa's Girls Together Outrageously project, aka the GTO's. It was Frka who suggested Zappa to give Alice Cooper a recording contract and she was instrumental in establishing their image.In later years Frka moved to Cohasset, Massachusetts, renting accomodation from Jonathan Richman & The Modern Lovers. Her final years were spent in much discomfort, encased in a body-cast to help correct a crooked spine. She died of a drug overdose in the fall of 1972.

She is mentioned in John Mayall's "2401" and Joni Mitchell's "Ladies Of The Canyon".

Christine Frka was also mentioned and thanked in the liner notes of The MOFO Project/Object (2006) album. [1]

"The residents at that time included my wife, Gail; my secretary, Pauline Butcher; our road manager, Dick Barber; Pamela Zarubica; Ian Underwood; Motorhead Sherwood; and a girl named Christine Frka - the woman on the cover of the Hot Rats album crawling out of the crypt. Christine Frka was our baby-sitter, along with Pamela Des Barres."

"Miss Christine's Story: She, too was born in San Pedro of Yugoslav parents. She was a "sickly kid," she says, and had a "big complex about being skinny." (She is tall and lean, the type of girl who would have been called "beanpole" by her schoolmates.) "Pop music brought it all together for me socially," she said. "It brought people together, it gave me friends." She says she is the cold, cruel one in the group, but she's not. She's bright and quite outgoing. She met Zappa when he returned to LA from New York for a concert, when she was living in Franzoni's commune. "We talk about groups a lot," she said. "That's because it's glamourous and because we're very young. If you have a fave rave in a band, it's like having a soldier in the war; you write him letters and you worry about him." When Zappa returned to LA for good, she became his housekeeper and governess to Moon Unit, Frank's daughter. "Mercy and I sent The Velvet Underground a dozen roses with our pictures on the back," she said. "You can't be subtle." Miss Christine loves clothing and makes all her own, which can only be described as junkshop harlequin. The night of our interview she was wearing a knitted patchwork jump suit in a hundred colors, colored pipe cleaners coiled into her frizzed character; not a bad description."