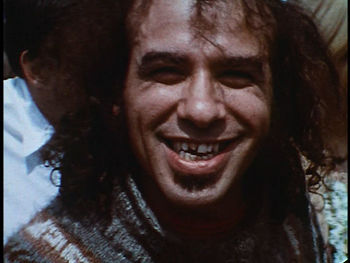 Carl Orestes Franzoni, aka "Captain Fuck", was a member of Vito Paulekas' dance troupe. He was part of the Freak scene on Sunset Strip in 1964-1965. Paulekas' Dance Troupe used to attend the early Mothers Of Invention shows and occupied The Log Cabin with his commune, prior to its occupation by Zappa's family. Franzoni also provided vocals for Freak Out!. The song Hungry Freaks Daddy is dedicated to him and in the liner notes to the song Zappa describes him as "freaky unto his toes". [1]. In 1973-1974 Zappa wore a pair of shoes painted in crazy colours by Franzoni.[2]

On page 69 of The Real Frank Zappa Book Zappa describes a concert in Dallas, where Franzoni was dressed in a tight ballet maillot, shaking his crotch:

"The high point of the performance was Carl Franzoni, our 'go-go boy.' He was wearing ballet tights, frugging violently. Carl has testicles which are bigger than a breadbox. Much bigger than a breadbox. The looks on the faces of the Baptist teens experiencing their grandeur is a treasured memory." - Frank Zappa, quoted in The Real Frank Zappa Book.