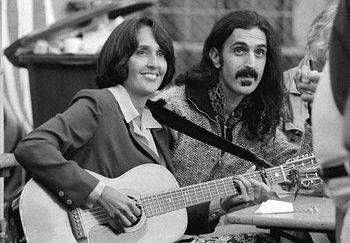 Joan Baez (Staten Island, NY, 1941) is an American folk singer, guitarist and activist. She is famous for one of the foremost protest singers of the 1960s and 1970s and was once Bob Dylan's partner, both creatively as well as romantically.

She quit Boston University to sing in local coffee houses and gave highly successful performances at the Newport Folk Festival in 1959 and 1960. Her first three albums - "Joan Baez" (1960), "Joan Baez, Vol. 2" (1961), and "Joan Baez in Concert" (1962) went gold and stayed in the bestseller charts more than two years.

From 1962 to 1964, Baez was the popular face of folk music, headlining festivals and concert tours and singing at political events, including the August 1963 March on Washington. During this period, she began to champion the work of folk songwriter Bob Dylan (also name-checked on the cover of "Freak Out!"), and gradually her repertoire moved from traditional material toward the socially conscious work of the emerging generation of 1960s artists like him. Her albums of this period were "Joan Baez in Concert, Part 2" (1963) and "Joan Baez/5" (1964), which contained her cover of Phil Ochs' "There But for Fortune," a Top Ten hit in the UK. Baez continued to experiment in the late '60s, releasing "Baptism - A Journey Through Our Time" (1968), in which she recited poetry, and "Any Day Now" (1968), a double album of Dylan songs done with country backing, which went gold.

In March 1968, Baez had married anti-war protest leader David Harris, who was imprisoned as a draft evader. Harris was a country music fan, and Baez's turn toward country, which continued on "David's Album" (1969) and "One Day at a Time" (1970), reflected his taste. "Blessed Are..." (1971) was a gold-selling double album that spawned a gold Top Ten hit in Baez's cover of the The Band's "The Night They Drove Old Dixie Down". It was followed by "Carry It On" (1971), the soundtrack to a documentary about Baez and Harris. In the late '60s and early '70s, Baez moved toward pop/rock music and also began to write her own songs, culminating in the gold-selling "Diamonds & Rust" (1975), which was followed by the entirely self-written "Gulf Winds" (1976).

She gave free concerts supporting civil rights, UNESCO, and anti-Vietnam war rallies, and was imprisoned briefly (1967) for refusing to pay tax towards war expenses. In 1968 she published an autobiography, "Daybreak" (a further volume "And A Voice To Sing With" appeared in 1987). In 1970 she sang the "main theme" in the Guiliano Montaldo film "Sacco & Vanzetti" (also name-checked on the cover of "Freak Out!"), with music from Ennio Morricone. A legendary protest figure for over five decades, she continued to perform at fund-raising events around the world.

Joan Baez is included in the list of names on the sleeve of Freak Out!.

In 1966 Joan Baez performed at The Big T.N.T. Show, where Frank Zappa was in the audience.