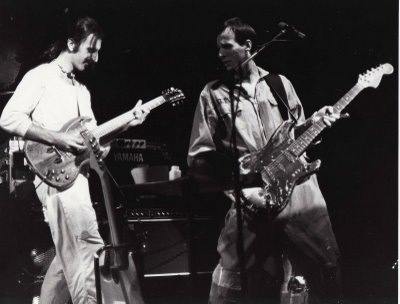 He was also mentioned and thanked in the liner notes of The MOFO Project/Object (2006) album. [1]

Belew was playing with a local bar band in a small club in Nashville when Zappa came in to see them:

“Frank gave me a list of difficult songs from several different records, and his instructions were, ‘Figure out how to play and sing this the best you can, however you can.’ The music was pretty complicated for a guy who was just playing in a bar band. I had never played in odd time signatures, and I didn’t read music, whereas the rest of the Frank’s band did. And I was so poor at the time that I didn’t even buy the records. I borrowed them from my friends, because I didn’t know if it was going to work out anyway.

“The audition was pretty brutal, and I didn’t do very well. It was like the chaos of a movie set with people moving pianos around and so on. And there’s little me standing in the middle of a room with a Pignose amplifier and a Stratocaster trying to sing and play lots of Frank Zappa songs. I was so nervous. I remember doing ‘Andy,’ and ‘Wind Up Workin' In A Gas Station.’ I thought I did poorly, and I had nowhere to go. I had just flown in, and was driven to his house, so I sat there all day watching everyone else. I watched some really tough auditions, especially for keyboard players and percussionists. I didn’t see any other guitar players, but I was later told that he auditioned 50 guitar players.

“At the end of the day, when it all calmed down and people were finally leaving, I finally got my time to speak to Frank again. I said simply this: ‘Frank, I don’t think I did so well. I imagined this would have happened differently. I thought you and I would sit somewhere quiet, and I would play and sing the songs for you. And he said, ‘OK, then let’s do that.’ “We went upstairs to his living room, and we sat on his purple couch. I placed my Pignose amplifier face down on the couch so I could get a little bit of sustain, and I auditioned all over again. At the end of it, he reached out his hand and said, ‘You got the job.’ We shook hands, and that was an absolute turning point in my life.”

Belew subsequently performed with David Bowie before Joining King Crimson in 1981. He has worked with numerous bands and musicians (including Laurie Anderson in the mid 1980's and 1994) as well as solo projects and his band Adrian Belew Power Trio.

'"When you come face to face with a genius its undeniable. From my first handshake with Frank in 1977 to our last private talk in his living room just months before his death, he seemed surrounded by the urgent aura of someone meant to create something no one else could. Not surprisingly, Frank was driven: the hardest working musician ive ever seen. Very serious about his music and its treatment, yet clearly enjoying his unique position as a creative force known and revered througout the world" [2]